Flying the Main Southwest with Greg Sprague and Bob Matthews

One fine fall day in September, 2016, my friend Bob Matthews phoned to see if I was interested in going flying. Bob is both an accomplished fly fisherman as well as a pilot so I was a bit confused – was he was asking me to go fishing or to go up in his Cessna 150, a single engine, 2-seater aircraft? “I’ll pick you at 7:00 am tomorrow. The weather looks good. We can fly from Weyman Airpark in Burtt’s Corner to Doaktown in half an hour, then follow the river up to Juniper and be home by noon.” Being a bit of an amateur photographer I had mentioned to Bob on a couple of occasions that I would love to try taking a few photos of the Main Southwest from th 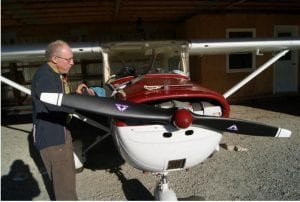 Bob Matthews checking out his Cessna.

e air if he ever needed a co-pilot. Seeing as Bob is one of the few people I would trust to take me thousands of feet up into the air with only one engine and his skill between me and a crash landing, I was quick to accept his invitation.

I was a bit nervous at first but as Bob did his walk-around and pre-flight checks my nerves disappeared. Just as the weatherman had promised the day was sunny and clear, however the quarters in the cockpit were very cramped. There was no room to bring my camera bag on-board so I was limited to one lens, an 80-200 zoom lens, that I could only point out the front windshield since there was no chance of turning sideways to take pictures out the side door. I was also concerned that the Plexiglas windshield would make for very fuzzy photos.

But in the end I was very pleased with the results. The trip was fabulous giving me a whole new perspective on the incredibly beautiful Miramichi River. And the photos turned out to be a bonus that will help me remember a wonderful morning flying over the river. Thanks for the invitation Bob. I am sure glad I accepted.

Click to enlarge any of the photos below. All photos by Greg Sprague.

Islands below the Doaktown highway bridge.

The bridge at Ludlow

Looking up river at Norrad’s Bridge.