Tales from the Beehives

Well, the snow has started to cover the ground and any remnants of blooming flowers are now all but a memory. As the temperature plummets, bears go into hibernation and most birds fly south, but what do honey bees do during the cold winter months in New Brunswick?

Contrary to what most people would think, honey bees do not hibernate but remain active in the hive all winter long in anticipation of the return of spring. They drastically reduce their foraging activities and stop flying when the temperature drops below 10 C (50 F). They remain inside their hive in what is called a winter cluster. That means they get into a big huddle to maintain warmth, protect the queen and live off the honey and pollen stores they laboriously collected over the warm summer months. The worker bees create heat by continually contracting their flight muscles, resembling shivering, and they also move back and forth between the inner part and the outer part of the cluster. In this way, the heat is circulated within the cluster so no bees will freeze. 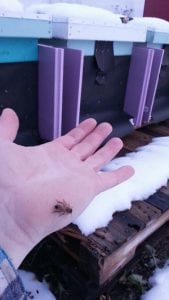 It can be -25 C (-14 F) or colder outside the hive but the centre of the cluster is kept at about 26 C (80 F). There is no point to flying outside of the hive, as there are no flowers in bloom. Occasionally, on a mild sunny winter day, they will fly out of the hive for a short distance and then promptly return to perform what is called a cleansing flight (i.e. bathroom break and stretch out their tiny wings and cabin fever kinks). The colder the temperature the more compact the cluster becomes. The queen remains warm and protected in the centre of the cluster. She will usually stop laying eggs in late fall and will slowly return to her egg laying activity sometime in mid-January. The workers in the colony will then resume their tasks of raising and nursing a new generation of baby bees.

As a beekeeper, there are a few important procedures I do to help promote hive survival when winter rolls around. To help heat retention within the hive cluster and to shelter them from the harsh elements, I wrap my hives with a layer of weatherproof paper and Styrofoam. Special attention is also taken to insure there is adequate ventilation in the hive. While bees consume honey for energy and to maintain warmth, they produce a substantial amount of moisture and carbon dioxide. These can be detrimental to the survival of the colony if not properly evacuated out of the hive. 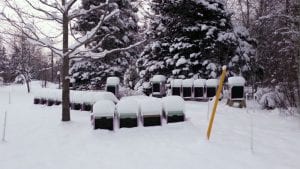 Before wrapping up my hives in late fall, I perform a thorough inspection to assess the strength of the colony. It is important to make sure that the food stores are adequate, that the queen is healthy and that the colony is free of diseases and pests. From this point on, the fate of the colony is out of the beekeepers hands. It becomes an anxious period for the beekeeper as the hives will not be reopened for another four to five months. If the weather permits, a very brief sneak peek inside the hive may be done at the end of March or early April to assess the status of the colony. At this point, emergency feeding may be initiated to colonies that might be getting low on their food reserves.

During winter, I get preparations underway for the following spring. I clean, repair and build anticipated equipment for the new season. If old man winter is kind, I can hopefully expect a bee-zy return to my hives come April and another buzzing season of healthy bees producing pure and delicious fresh honey!

Here are a few fun facts about bees:
• Honey bees are the only insect that produce food eaten by humans.
• Worker honey bees are all female. (Sorry guys!)
• The average worker bee produces only 1/12 teaspoon of honey over her lifetime.
• A worker bee has a short life span of about six weeks but the queen bee can live to be five years old.
• Honey never spoils.