Book Review: “The Lynching of Peter Wheeler” by Debra Komar 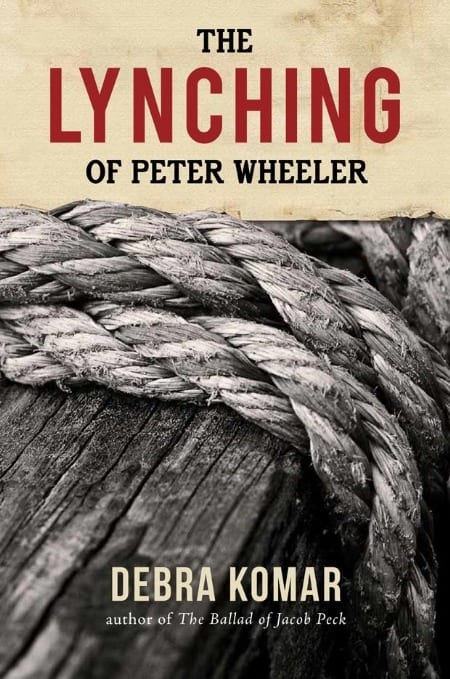 Author and forensic anthropologist Debra Komar has written two books dealing with murder and wrongful conviction in Atlantic Canada’s past. Her first book, The Ballad of Jacob Peck (2013, Goose Lane Editions) was about a murder inspired by religious fervour that occurred in 1805 in New Brunswick. The follow-up, The Lynching of Peter Wheeler (2014, Goose Lane Editions) is about the wrongful conviction of Peter Wheeler in the death of Annie Kempton in Nova Scotia in 1896.

Ms. Komar applies her impeccable credentials as a forensic anthropologist with years of courtroom experience to pursue the evidence through from start to finish.

The Place, the Crime

The small town of Bear River, Nova Scotia lies close to Digby which is on the Bay of Fundy. Peter Wheeler born in Mauritius of British parents, and at a young age led an itinerant life, having served on board sailing ships before landing in Bear River as a day labourer. Short of stature, intelligent but with a swarthy appearance, he stood out in the all-white close-knit community. It is primarily due to being an ‘outsider’ that he was wrongfully (and hastily) accused of Annie Kempton’s gruesome murder. More a case of xenophobia than racism exacerbated by irresponsible newspaper reporting, for Peter Wheeler there would be no prospect of a fair trial.

The author applies her impeccable credentials as a forensic anthropologist with years of courtroom experience to task (as she did in the Jacob Peck book) to pursue the evidence through from start to finish. She thoroughly examines not only the principal characters in light of the available facts (as court records were scanty), but also the case against the background of Victorian mores. This was also the age of the ascendance of crime investigation in the mould of Sherlock Holmes and the perceived infallibility of the printed word as found in the daily newspaper or weekly tabloids of the era. All combined in a deadly admixture that had Peter Wheeler fully hanged and buried before he even appeared before judge and jury.

I must say a word here about Ms. Komar’s distinctive writing style. In The Ballad of Jacob Peck, I found it, along with her voice, a little annoying and overly accusatory of the guilty party (Jacob Peck, despite his culpability). In her third book, The Bastard of Fort Stikine (2015, Goose Lane Editions) I was glad to discover that she had softened a bit and stayed closer to writing about the story itself. Peter Wheeler is interesting as it marks the transition from one voice to the other. I soon began to get used her style and thought processes as I read this book. Here is one of my favourite passages; it is the introductory paragraph to chapter 30, “Bad Blood”:

Courtrooms attract lazy or questionable science in much the same way the hackneyed simile “like flies to honey” lures ham-fisted writers. Boffins of the lowest stripe gravitate toward the brilliant glow of the courthouse in hopes that its cleansing rays of sunlight, intended to disperse the darkness of ignorance, will somehow absolve them of their sins of scientific mediocrity and the blatant prostitution of their skills.

Another insightful paragraph can be found on page 271 where Ms. Komar describes the path this case concerning how Peter Wheeler, a lowly dollar-a-day worker gradually made it all the way to the top of the legal food chain (the Governor General of Canada) whose salary was $10,000 per annum. Despite the costs involved and the combined intelligence of all these lofty men (who often lacked wisdom and insight), they still managed to hang an innocent man. The newspaper reporting of the day was equally as culpable, influencing public opinion to a fever pitch. After all, these were the days before bylines, creditable sources and libel cases; papers could print whatever would sell.

I enjoyed this book more than The Ballad of Jacob Peck, but not as much as The Bastard of Fort Stikine, but all three make for superb reading (a fourth book, Black River Road, is due out in September 2016). I especially like the way Ms. Komar uses her keen analytical and legal mind to look at the facts of the case and point out the faults of the courtroom testimonies. As she mentions, with hindsight and a distance of over a hundred years of forensic advancements, it is easy to shoot holes in the courtroom’s proceedings, not to mention the capricious actions of the press.

To sum up, if you like true crime, courtroom drama and history, then any of Ms. Komar’s books will appeal to you just as they did to me.