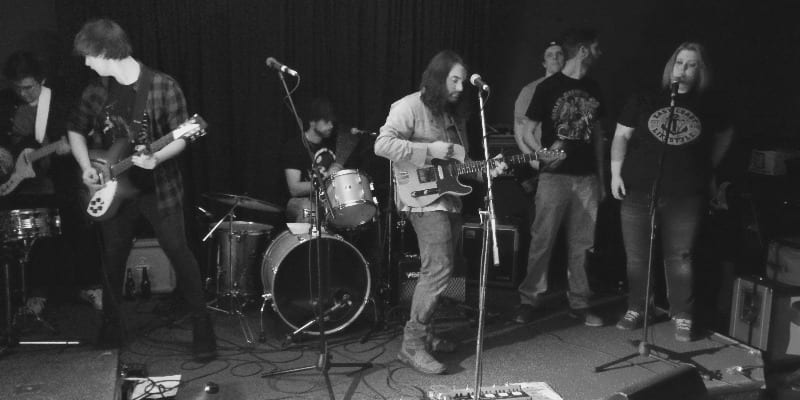 by Lucas Durelle, The Modern Typewriter

During my last interview with local musican Dillon Ryan, He mentioned a band named Aftersurf. I got in contact with the bands front man Riley H and set up a meeting to discuss their music and their passion.

Aftersurf wanted to meet at their studio and after circling around a couple of times, I finally found the location. I was immediately greeted by the front man Riley H.

Riley H. stood on the deck and waved me into the studio where I was greeted by the rest of the band.

They all took turns introducing themselves. Riley H started his music career by learning to play the drums.Being the front man of Aftersurf, He takes the role of lead vocals and rhythm guitar.

R.H “I played drums from the time I was 10 and still do, for other bands. I only seriously started playing guitar 3 or 4 years ago.

As I made it around the room with the introductions and shook the hands of the band members. I was then introduced to the backup and harmony singer Jill H. Riley described her singing as being very fluid, and being able to sing in any genre and any style comfortably.

J.H – “I’ve been singing since I was young, Ive never sang in public until I was 15.

The hardest thing to find when forming a band is the bass player. Luckily, Aftersurf landed one hell of a bass player, Robbie O. When I asked him how long he’s been playing bass and why he chose bass over guitar, Robbie had a perfect answer.

R.O – “I’ve been playing bass for 18 years, I actually play guitar but its much easier to get in a band if you play bass.”

The room shared a laugh at the joke Robbie made and then I was introduced to the drummer, Joey S. A carpenter by trade, but a roaring drummer by night, I asked how long he has been playing, and I was shocked to find out the answer.

J.S – “Two months!” I don’t know what happened but it worked. I’ve always had interest in the drums, music in general actually”

R.H – “He learned to play drums in one night”

Riley smirked over to his drummer as they nodded to each other in appreciation. Once the formalities of introductions were over, the band picked up their instruments and showed me their set list.

The first song of their set was entitled “You Wanted Too”. As Riley H strummed his first chord, it had echoed the entire room. The drums carried a very solid beat that kept you tapping your foot, and the groovy rhythm of the bass flowed throughout the song, complimenting the harmonic melodies of Riley H. and Jill H.as they sang in union, never missing the pitch. It truly was groovy in the sense of an outer world experience.

Immediately after the first song ended. They kicked into a much faster amd heavier style of song entitled “Gimme A Shot in the Arm”. A hard rocking beat that features Joey S. heavy drums and a solid bass lead by Robbie O. that simply compliments each other’s sound. Before the chorus, Both Riley H. and Jill H. have a slow melodic vocal moment that weaves you into a trance then jumps back into a hard hitting chorus.

The band practices two to three times a week and have only been together for over 5 weeks and I must say, it is amazing how far these four talented individuals came together as a group and focused all their energy and passion into their album.

The album by Aftersurf is a group collaboration by the four members is a ten track album and it is entitled Solipsism. Puzzled, I asked what the significance of that title.

R.H- “Your gonna have to Wikipedia that one”

Once again we shared a laugh and in fact, I did Wikipedia that term and I don’t believe I am the right person to explain it. So if your intrigued to it’s meaning, I’m going to have to quote Riley H. on that matter. Your just gonna have to Wikipedia that one.

When I asked the band what song they were gonna play next, Riley H. gave a smirk and approached the Microphone.

Riley H let out a laugh and corrected the title.

The group is a very fun loving, having a good time band with constant jokes and quick one liners, They simply seem to pour out a positive energy. Throughout the night the constant sound of laughter carried on through the studio.

Immediately after the joke, The guitar lead into the song entitled “Tell Me When You Want Me Too” The guitar and bass played back and forth in complimentary harmony and follows with the high pitches and soft harmonies of the vocals of Riley H. and Jill H. the song ends with Joey S. rattiling the cymbals.

The way music is made is almost always influential by other bands or songs that are being heard. I decided to ask the members of Aftersurf what their biggest influence was.

R.H – “Currently I’m listen to a couple different bands, my music is very fluid but right now I’m listening to King gizard and the lizard wizard.”

J.H – “I don’t know, I truly listen to absolutely everything from the Beatles to what’s playing on the radio today”

R.O – “For me, Its guns and roses for sure, biggest influences for sure”

Even though the band has only been playing together for over 5 weeks, The professionalism in their music is very united, working like a well oil machine. They can’t really define their music by genre at the moment but it has been spoken of.

I suggested and found their sound could be compared to psychedelic rock while Mackenzie Morris compared their sound to old school Beck. They all agreed.

R.H – “I try to make every song the feeling you get when your watching space jam and the space jam song comes on. gets you pumped” “we’re more interested in creating original art, the four people that are here, they want to create original art with me, that’s what we want to do.”

A topic I brought up in my last spotlight article was how difficult it can be for the artist to deal with the pressures of putting yourself out there and recieving any critism.

R.H – “I think when you create original art, you always have a little bit of self doubt and I think when we are in this room, we are in our own world and it’s interesting when we go to other places like Moncton, we bring alittle of our world to the audience and see their reaction. The four of us understand the nod and the wink of playing live.”

As they played their third song from their set list entitled “To Be True” I watched the band jam in harmony from the steady beat of the drums keeping time, to the harmonic vocals of Riley H and Jill H.

Throughout the night, The band keep calling their recent song ” The One” while they all agreed that it was the highlight song of the set list entitled “Enterview” Joey S. and Robbie O. we’re very excited to show this track and I now understand why, it truly is, A great song.

I can only describe the second last song on their setlist as perfection, as the guitar starts off strong and the bass running behind following the lead with a single note at first when a sudden quiet lull happens and you hear the the drums being kicked into a powerful boom. The little melodies played by Riley H as he jumps back and forth between the microphone and his drummer. The strong lead of the bass powerfully being strummed by Robbie O. and the kick ass sound of the drums being kicked in by Joey S. is all accomponied by the energetic voice of Riley H as he screams out a loud “HEY!” It brings an energy to a crowd.

When the song ended, the band, my accomplice Mackenzie Morris and myself cheered in union as a sudden strike of energy lit up the room, it was simply a rocking experience.

As the night came to an end, they played their final track on the set list and the title was “Enterlude”. I can only describe the sound as a very fluid, jazzy, melodic tune that sort of makes you at peace with yourself.

As we departed for the night, I was asked to sign the diamond shaped mural, A tradition amongst the band for all other artist who have visited the studio. It was a one of a kind experience to hang out with Aftersurf for a few hours and gain insight into their music.

Make sure to check them out live for yourself. Aftersurf will be playing at Creative Grounds Café on April 21st 2017 then again at Plan B In moncton on April 26th 2017 and their final show for the month of April being at The Well Pub on April 29th 2017.

I would like to thank AfterSurf once again for the opportunity for this interview and for allowing Mac Morris and I to be apart of your musical experience.

This interview was originally published on The Modern Typewriter.