May 28, 2017/Giv'er Miramichi/Be the first to comment/Arts & Entertainment, Community & Fundraising 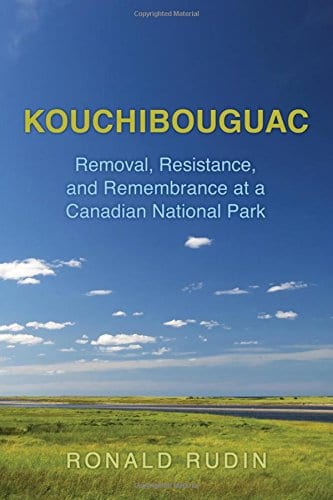 Subtitled “Removal, Resistance and remembrance at a Canadian National Park,” this 400 page book from the University of Toronto Press is a study of the expropriation and forced removal of 1200 people from 7 communities, which were then obliterated to make for a more ‘natural’ National Park in 1969. Author Ronald Rudin is a professor in the Department of History and co-director of the Centre for Oral History and Digital Storytelling at Concordia University. His most recent book, Remembering and Forgetting in Acadie, received both the US National Council on Public History Book Award and the Public History Prize of the Canadian Historical Association.

Kouchibouguac is an excellent book, not only as a resource, but as enlightening reading for anyone with a social conscience.

Divided into three parts, Removal, Resistance and Remembrance, Mr. Rudin moves methodically through the background history of the creation of the park and how the various levels of government-provincial and federal – failed miserably in dealing with those communities who suddenly found themselves within Park boundaries with ever being consulted. They were considered too poor and uneducated and in need of rehabilitation. Yet, as Mr. Rudin discovers, true they were poor, but they were basically happy living how and where they did. The communities were very close-knit, consisting of extended families and all working to provide food, shelter and clothing for themselves and their loved ones. They fished, farmed, logged, trapped and picked berries, the land providing all they needed. Into this idyllic setting swoops government official and planners in need of finding a suitable location for a National park in New Brunswick.

In 1966 Parks Canada officials performed an assessment of the area. Mr. Rudin comments on their report:

“The assessment suggested that no one really lived in the area, or if they did, they did nothing of importance. It was recognized that developing the park (as its limits were defined at the time) would require the destruction of more than one hundred dwellings, yet there was no mention of how many people would be removed in the process.”

People were paid a pittance for their land, their homes either being relocated outside park boundaries or burned. Many did not want to go or give up their fishing rights (since fishing is not allowed on park property). One man, Jackie Vautour, is still an illegal squatter on park land where his house used to be (it was bulldozed in 1976), the park leaving him alone for fear of the bad publicity his forced removal would cause.

Mr. Rudin, in the writing of this book, visited many of the families that were displaced to make way for the park and examines their feelings some 40 years later. One example is that of Freeman Collins who was visited in 2011, shortly before he died. He and his wife had lived on 54 acres of land. Like many other residents, Collins was a veteran, who on his return from the war, built a house and worked at various jobs, “never imaging that the same country he defended would someday be instrumental in removing him from his land.”

I was surprised by a few things in reading this book. First, just how readable it is. I was expecting some dense paragraphs packed with dates, statistics and other mundane facts, but the writing is very easy to follow, yet the author is never glib or staid and treats the subject with due impartiality as a good examiner should. As Mr. Rudin mentions in the forward, he could not get any government official involved with the park’s creation to comment, but he did get access to extensive government files as well as the personal papers and photographs with the resident’s permission. The text is supported by black and white illustrations and maps. Secondly, I had no idea that people were forcibly removed to make the park (in fact, this was the single largest forced removal in the history of the Canadian national parks system), and this was not the only instance. Forillon National Park in the Gaspe and Gros Morne National Park in Newfoundland had similar histories. In fact, after Kouchibouguac was created Parks Canada created a policy stating that there will be no further removal of residents in order to create a national park in Canada.

There is much more to the Kouchibouguac story, and it is all here: the Acadian connection, the repeated closures of the park due to resistance and protests, the present-day park commemorations of what was lost or destroyed 40 years ago and of course, the story of Jackie Vautour, the lone holdout resident. Kouchibouguac is an excellent book, not only as a resource, but as enlightening reading for anyone with a social conscience. Mr. Rudin is to be applauded for his intensive (and extensive) research and his obvious concern for getting the Kouchibouguac story told properly and lucidly.