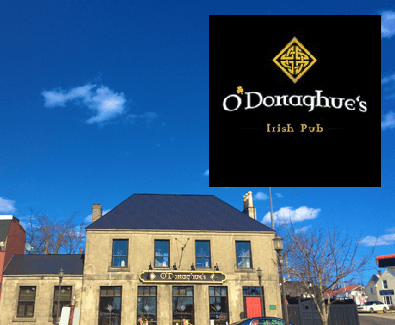 This year, Miramichi will enjoy four weeks of featured menus at 14 restaurants around the river.

A Taste of Miramichi, the Miramichi Chamber of Commerce’s dining event, runs from May 15th until June 11th, 2017. Each participating restaurant will showcase a three-course menu (with two options for appetizer, entree, and dessert) which their chefs feel represent their unique “Taste Of Miramichi”.

We will be highlighting each restaurant’s menu and sharing a video about them.

Today we introduce O’Donaghue’s Irish Pub located at 1696 Water Street in Chatham. Chef Lee Jones invites you to join him and his team for a little Taste of Miramichi!

“Miramichi’s Irish Heritage is alive at O’Donaghue’s Irish Pub! O’Donaghues Pub re-opened Canada Day 2016, and is now officially a member of the Historic Chatham Business District in Downtown Chatham. Drop in for a cold beer or something to eat from our new revamped menu today. Our friendly staff are happy to serve you!”

Entrée
Centennial beer battered fish and chips (We’ve paired two legends; Irish lager and a fresh fillet, we’ve lightly battered it and we’re serving it up with thick cut fries, our own “chi-side” slaw and serving of homemade tartar sauce) OR Pulled pork (House smoked pork shoulder smothered in our hickory BBQ sauce and topped with slaw. Served on a potato scallion bun.)

The post Introducing O’Donaghue’s Irish Pub in A Taste of Miramichi appeared first on Miramichi Chamber of Commerce.