Miramichi Fishing Report for Thursday, May 4, 2017

MIRAMICHI – Fishing this week depended where you were.  From the mouth of the Cains down the water was very high and dirty while above it was fishable and catching was good for spring salmon. Striped bass was sporadic with some places good and others just producing a few here and there. The weekend weather could produce a very heavy rainfall if the forecast holds.  This will bring most angling to a halt and make it tough going for sure.

W. W. Doak and Sons in Doaktown said the fishing was good, but there were not a lot of people out.  One sport had caught several salmon, while his wife landed a plus 20 pounder.  The water was fishable and quite cold, with good numbers of fish around.  As a result, they predicted another two weeks of good spring salmon fishing.  Although the water had been high, it dropped nicely as the section of river between Doaktown and Boiestown usually drops quicker than in the Blackville area which has to deal with water from the Cains and Bartholomew Rivers.  There were more reports of salmon than grilse. Flies of choice were Renous Specials, Christmas Trees, Black Ghosts, Grey Ghosts and Marabous.

Andrew Anthony of Ledges Inn in Doaktown and Mountain Channel in the Rapids area said they were having good fishing.  The water was fishably high, but clear.  Most anglers were close to limiting out.  There were more salmon than grilse, with a lot in the 32-inch range.  There was one salmon that measured 41 inches.  They saw two otters playing in one pool and a mink in another. Flies of choice were mainly Marabous and Rabbit-Strips (Zonkers), along with traditional streamers such as Renous Specials, Blue Smelts and Christmas Trees.

Herb Barry Sr. of Herb’s Fly Shop on the Station Road in Blackville said that fishing there was hard as the water was quite high and few were out.  With heavy rain forecast for this weekend, the outlook was not great. Flies of choice were Silver Smelts, Blue Smelts and Grey Ghosts.

Curtis Miramichi River Outfitting in Blackville said there were not a lot of anglers out, and not many fish taking as the water was very high and somewhat dirty.  However, they had heard that fishing was good in the Doaktown area.  They are putting on a full day fly tying workshop with Cathy (Colford) Mehlitz and Brock Curtis serving as instructors on May 13.  There are still some spots open.  Cost is $95.00.  Flies of choice were big and bright such as Golden Eagles, Christmas Trees and Renous Specials. 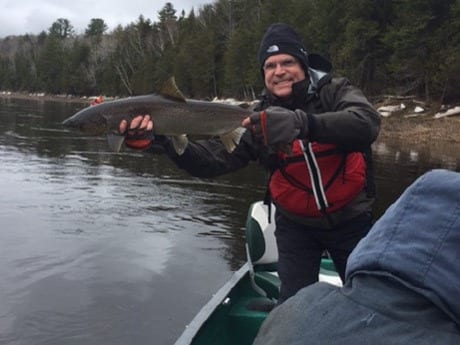 Dave Fenderson’s son, David, with one of several salmon he caught at Salar Haven Fishing Club during a weekend in April. Submitted by Dave Fenderson of Cumberland Foreside Maine.

Jim Laws of Miramichi Hunting and Fishing in Newcastle, Miramichi reported very few spring salmon as most anglers were not bothering to head out as the weather has not been great.  Striped Bass angling was sporadic, with some areas such as Mill Stream on the Northwest and lower parts of the main river such as Loggieville getting decent numbers, while other were producing only a few here and there.  Generally the water was high and dirty with a lot more rain predicted for the weekend.  Flies of choice for spring salmon were big and bright such as Golden Eagles, Christmas Trees, Renous Specials and Black Ghosts.  Most bass anglers were using the rubber fish.

Syd Matchett of Trout Brook Fly Shop on the Northwest Miramichi said fishing had been good until last weekend when it rained.  The water had come up and was very high and very dirty.  One angler fished three days and only caught two salmon, while the others in his group did not catch any.  Roger Brownback did fish Monday with a full-sinking line and hooked 12, landing nine.  But generally, it has been tough fishing, and the water was still high Wednesday, and a lot more rain is forecast for this weekend.  If we get what is predicted, combined with the fact that there is still a lot of snow in the woods, especially in the high country, the water could still be up for a while.  There were more salmon reported than grilse, with a lot in the 36-38 range.  There was one reported at 43 inches.  Flies of choice were Golden Eagles, Renous Specials and Silver Smelts.

Debbie Norton of Upper Oxbow Outdoor Adventures on the Little Southwest Miramichi said the water came up late last week, but they started catching fish again on Sunday. They were catching on Monday and Tuesday until the water came up again and that was it for hooking fish.  With more rain on Saturday, it could be a while until the fishing picks up again. Anglers were catching striped bass around the Mill Stream area. Fly of choice was the Renous Special.

So try to get out before Saturday because after that it could be a challenge depending on the weather.

Thought for the Week: “Our tradition is that of the first man who sneaked away to the creek when the tribe did not really need fish.”  – Roderick Haig-Brown, about modern fishing, A River Never Sleeps, 1946 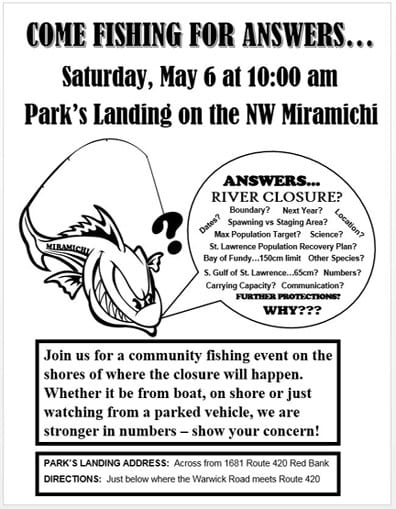