MIRAMICHI – We are still experiencing a bit of the “in-between” season.  There are more positive reports of sea trout, still only a handful of bright salmon reported, and good striped bass reports in some areas, but quiet in others.

But first, an item that may affect a lot of anglers, and one that most deem to be very unpopular and extremely unnecessary:  The closure of close to 10 kilometers of the Northwest Miramichi tideway where striped bass are spawning.

From Thursday, June 1 to Friday, June 9, 2017 inclusively, angling will be prohibited from the bridge in Red Bank downriver approximately 9.8 km to a line crossing the Northwest Miramichi River on a north/south axis from the point where the road 425 (Boom Road) meets Road 435 in Whitney, and defined by two points as indicated on the following map. 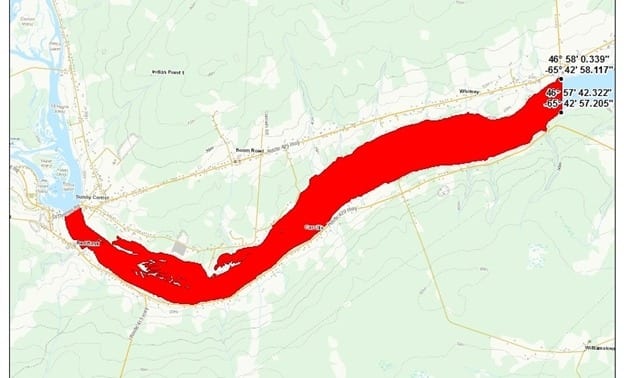 The Northwest Miramichi River estuary is the only confirmed successful spawning ground for Striped bass in the entire southern Gulf of St. Lawrence, as established by DFO science. The closure of all angling in the area and during the time when the Striped bass are most concentrated and actively spawning aims at ensuring the best success of spawning activities and the continuous health of the Striped bass stock in the southern Gulf of St. Lawrence. With the exception of the area described above, the recreational fishery will remain open throughout the Miramichi river system during the striped bass spawning period.

Please refer to Gulf Variation Order 2017-038 which will be issued on May 31, 2017, for further details. The Orders Registry is available online at:
Orders Registry – Order summaries for existing fisheries

See the Recreational fishing plan for Striped bass in the Southern Gulf of St. Lawrence in 2017

*The notice published on May 4, 2017, was updated to indicate the dates of the closure.

W. W. Doak and Sons in Doaktown said anglers were catching some nice sea trout and river trout between Blackville and Boiestown.  Some were in the five pound range.  The water was cold, and maybe a tad high in the Blackville area, but good above that.  They had heard of a few bright salmon on the Northwest Miramichi, but the only report of a bright on the Southwest was by a trout fisherman who saw one going through the pool he was fishing.  Flies of choice were Mayfly hatches, Green Machines, Muddlers, Streamer patterns on smaller hooks and a few dry flies such as Wulffs.

Andrew Anthony of Ledges Inn in Doaktown and Mountain Channel in the Rapids area said anglers were picking up lots of nice sea trout in the three pound range as far up as Norrad’s Bridge, and some nice river trout as well.  The water was cool, but very fishable, although caution was advised when wading. Flies of choice were White Wulffs, White-tailed Green Machines and Emergers.

Herb Barry Sr. of Herb’s Fly Shop on the Station Road in Blackville said angling there was fairly quiet with no bright salmon reported and only a few trout being caught.  The water was cold and fishable.  Flies of choice were Humpies, Rat-faced McDougalls, Royal Wulffs and Blue Gnats.

Curtis Miramichi River Outfitting in Blackville said anglers were picking up sea trout and river trout, but there were no bright salmon reports there yet.  The water level was good. Flies of choice were Muddlers, Rat-faced McDougalls, Marabous (Green Slime & Olive), White-tailed Green Machines, Mickey Finns, and Maggott Smelts.

Jim Laws of Miramichi Hunting and Fishing in Newcastle, Miramichi reported hearing of one bright salmon on the Southwest, and both sea trout (3-5 pounds) and some river trout being caught.  Bass fishing was improving and some were starting to spawn. Flies of choice were Green Machines, Butterflies, White-tailed Green Machines, Shady Ladies and Black Ghosts.

Syd Matchett of Trout Brook Fly Shop on the Northwest Miramichi said they were picking up some nice winter trout in the 3-4 pound range and there was a 21-inch sea trout reported.  Several more bright salmon were hooked and he had heard of one hooked on the Dungarvon.  The water was a good temperature and a good height.  There were lots of striped bass being hooked around the Red Bank Bridge, and even some reported spawning in the Big Hole Tract. Flies of choice were Black Ghosts, Green Machines and Rusty Rats.

Debbie Norton of Upper Oxbow Outdoor Adventures on the Little Southwest Miramichi said there were striped bass galore below the Red Bank Bridge and some anglers using bass flies were doing extremely well.  There were a few trout and one bright salmon reported on the Northwest.  Water conditions were typical June 1 conditions and over all good.  The Northwest Barrier will be in operation again this year, and the a fish-counter camera has been installed on the Little Southwest Miramichi.  The exodus of smolt is complete. Flies of choice for bass were Deceivers, Poppers and bass flies.

So as we head into June, we anticipate an over all improvement, so get out and “on the water”.

Thought for the Week: “There are more fish taken out of a stream than ever were in it.” – Oliver Herford 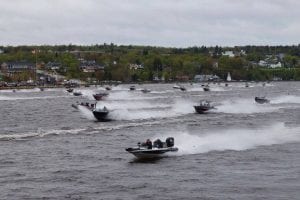 “One Last Cast” from Bouctouche repeat as champions. They weighed in four fish over the two day tournament with a total weight of 70 pounds.

A few event stats:
There were 1747 participants, 219 teams in the team division, 36 boats in family division, 783 in the individual division.
4460 lbs of bass weighed in (2.02 tons), 9 died.
There was a tagged fish caught that was also caught last year – same fish caught two years in a row!

Miramichi can brag they have a TON of BASS!
Thank you to all the participants, the city and staff, sponsors and volunteers

For more information on the Striper Cup, please visit miramichistripercup.ca

I thought you might find this interesting.
https://savethebaltic.wordpress.com/2017/03/15/the-swedish-supreme-environmental-court-has-decided-to-ban-and-stopp-fish-far
Guy Robichaud (see below)