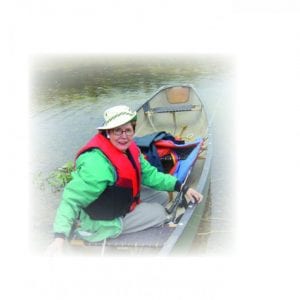 Anyone who has had the wonderful pleasure of meeting Betty Fitzpatrick, will easily know what I mean when I say that there a few other individuals that have such a zest for life. July of this year marked Betty’s 90th Birthday believe it or not and after the invite came and a lot of shock travelled around the MSA (Miramichi Salmon Association) and then maybe even some self reflection and amazement at this women’s accomplishments I decided the best idea was to just sit down with Betty to find what keeps her so young.

Born in the Chatham Area of Miramichi, Betty grew up hunting and fishing with her father, it was their way of life and as an only child she would accompany him on any hunting or fishing trip she could.

Being instilled with a sense of adventure from a young age Betty easily took to riding motorcycles.  It took a while for her husband to convince her to finally settle down and get married and even then she still wanted to take the motorcycles on the honeymoon. They moved and settled in Fredericton, NB and raised a family before Betty entered the workforce as a Realtor and quickly became known along the river. Not many realtors were as familiar with all the best fishing and hunting properties as Betty so she easily became the local expert. Betty is the kind of woman who always wants to be the co-pilot on the plane, drive her own motorcycle and hunt her own moose.

Betty’s work has taken her many places and she is still one of the top realtors on the Miramichi watershed if your looking for a nice piece of land for your fishing camp. She believes that the second you stop you’ll start to age and if you meet her you’ll easily see that this woman has a million things on the go at all times. She’s been a member of the MSA since 1999 and donates her time and expertise every year to the Fredericton MSA Conservation Dinner. Betty comes to every meeting with a fresh idea or new contact even after almost 20 years.