MIRAMICHI – The only remaining salmon rivers open until October 29 are the Bartibog, Tabusintac and Burnt Church Rivers which are all very low water at present.

If we get the rain that is forecast for today, perhaps there will be an opportunity to encounter some fall fish in these rivers.

Jim Laws of Miramichi Hunting and Fishing in Newcastle, Miramichi reported very good numbers of striped bass back in the system as part of their fall return. There are some bigger ones being hooked. They seem to be traveling around hitting one area today with good fishing, and then a different place the next. Most anglers are having more luck with bait, but some are catching using lures. The stripper season ends with the ghosts and goblins on Halloween with a daily limit of ONE a day between 50-65 centimeters.

So as this is the last few days of angling for salmon and stripped bass, throw in a little “Cast ‘n Blast” and get out for a season ending time or two “on the water”.

Thought for the Week: “I do what the voices in my tackle box tell me.” – Anon 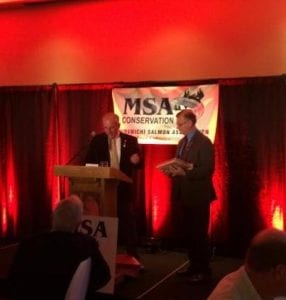 The 22nd Annual Fredericton Conservation Dinner took place on Thursday September 21st with over 300 salmon conservation supporters present. The MSA took the opportunity to formally acknowledge and recognize Kenmore Fishing Camp and its members for its ongoing support for the MSA. Over the course of the last 40 years Kenmore Fishing Club and it’s Members have been responsible for over $600,000 worth of donations to the MSA’s conservation activities. The live auction, which contained 27 items donated by local artists and companies, fishing camps, and various other MSA supporters, brought in over $40,000 towards salmon conservation. If you missed the event you most certainly missed out. The Fredericton MSA Dinner Committee would like to thank all those who attended, donated and purchased at the 22nd Annual Dinner. (Photo: MSA President Mark Hambrook Presents Kenmore Fishing Clubs President Jim Walker with a plaque in recognition for their contributions) 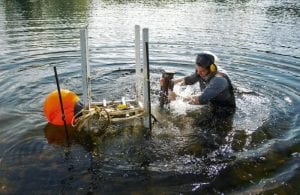 This year (2017) is the first full season where the Atlantic Salmon run is being monitored with Adaptive Resolution Imaging Sonars (ARIS) in the Miramichi River. After the sonars were installed in May, they have been recording the river continuously at two locations: Blackville (Southwest Miramichi) and Upper Oxbow (Little Southwest Miramichi). Five months of data have already been collected and we will keep recording until the end of November.

Imaging sonar is a device that transmits sound pulses and converts the returning echoes into digital images. It provides video footage of the underwater world even when working in zero visibility conditions, such as at night. My PhD research focuses on using sonars for counting and sizing the adult salmon that are returning to the river. (Photo: Jani Helminen doing some maintenance on one of the ARIS cameras in the river)

For the project a website (http://www.castsalmon.com) was established where we update the daily count of fish seen at the study sites. Our team has been able to analyze the data quickly during the summer and publish the numbers for both the Southwest and Little Southwest on almost a daily basis. In the autumn; however, we only provide frequent updates for the Little Southwest and the numbers from Blackville will be updated when the salmon have spawned and our field season slows down enough to have the time to analyze the sonar data. 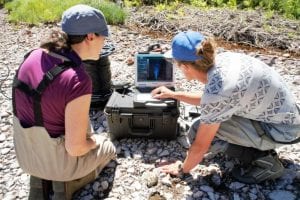 MSA’s Atlantic salmon conservation center in South Esk has been our team’s “basecamp” for the season. The data is being processed at the hatchery, and the facilities and staff members make the days at work (and the time between) easy and enjoyable. Coming winter, I will be taking all this data to our UNB office. The sonar method has already proven to be very useful but there is still plenty of work to do. One thing we will be working with is automating the video analyzing process. Computer software can analyze the data much faster, and that way we will have more time to spend on the River instead of manually counting the fish from the sonar videos. (Photo: PhD candidate Jani Helminen and field technician check out the ARIS cameras while on site in the Blackville Area)

We have also collected lots of “ground truthing” data that will be used for validating the sonar method. Different fish species have been recorded at our study sites by using underwater video cameras and sonar length measurements have been validated with real fish at Jacquet River Salmon barrier. This month we will collect sonar footage from two fish species, striped bass and salmon, in controlled environment at MSA facilities. Analyzing all the collected data will answer a lot of questions, but probably even more questions will arise. That is why more data will be collected next year.

Hope to see you on the River! For more information about the Sonar Imaging cameras Click Here!

Thanks to Our Important Funding Partners

2017 saw another busy field season for the MSA and the work we completed would not have been possible without our many generous donors and funding agencies.

For the fourth year in a row, International Paper provided a substantial donation toward the purchase of acoustic tags for our ongoing Smolt Tracking Study. The New Brunswick Wildlife Trust Fund also provided funding support for our Smolt Predation Study as well as our Juvenile Atlantic Salmon Assessment (Electrofishing) Study.

Thanks to funding assistance from the Atlantic Salmon Conservation Foundation, the Recreation Fisheries Conservation Partnership Program, and a number of generous private donors, the MSA was also able to complete two important cold-water refuge projects earlier this past fall. And finally, thanks to additional funding support from the Recreation Fisheries Conservation Partnership Program and other generous private donors, our field crew remains hard at work removing or breaching in-stream obstructions to ensure adult salmon have unfettered passage to their upstream spawning habitat.

Thanks to our generous donors and the many funding partners noted above, the MSA was able to carry-on and complete another year of critically important salmon conservation activities throughout the Miramichi watershed ! 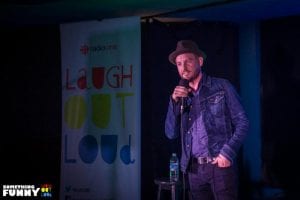 The MSA will be hosting its very first evening of comedy “Fishing for Laughs” at the Vogue Theatre in Miramichi, NB on November 18th, 2017. The evening will feature Martin Saulnier and headliner Jimmy MacKinley.

Born on the banks of the Miramichi River, Jimmy quickly fell in love with Stand-up comedy after borrowing a copy of Eddie Murphy Delirious from a classmate in the 8th grade. He has been performing for over 5 years and his credits include Laugh Out Loud on CBC Radio One, Sirius XM Radio, Hubcap Comedy Festival, and was recently featured in Gerry Dee’s (CBC’s Mr D) Standup Tour at Harbour Station in Saint John. 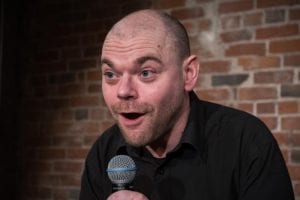 Martin Saulnier is co-founder and host of Comedie en Acadie. With his edgy comedy, he’s done his first festival at Le Tremplin in Degelis Quebec in 2015. He’s since also won Acadie Just Pour Rire and New-Brunswick’s Funniest in 2016. And was part of the Hubcap Comedy Festival in 2017.

Tickets for the evening are just $40 and include a glass of wine or beer and some smoked salmon. You can reserve your tickets today by contacting Kate at or via telephone at 506-622-4000. Looking forward to having a great turn out for such a unique event.

It has been a very busy October at the MSA! At the end of September our Field Technicians, Alexandra Dottin and Bruce MacCallum, finished helping DFO electrofish for juvenile salmon at the baseline sites and then we immediately started our broodstock collection with a full field crew. Broodstock were collected from the Sevogle River , the Cains River, and the Southwest River at Clearwater, Burnthill Bridge, and Juniper areas until mid-October. We would like to thank all the students and volunteers that came out to help. Spawning has begun at the Miramichi Salmon Conservation Center (MSCC) and will continue until all the salmon and trout have been spawned. The eggs will then overwinter at the hatchery until the spring, when they are released as first feeding fry into their rivers of origin. For more information on MSA’s stocking programs click here!

Our beaver dam crews have been working tirelessly to notch out any dams that are impeding prime spawning habitat. Over 40 dams have been breached and revisited, and we will be breaching many more in the next 2 weeks. With the low water levels and lack of rain this October, we are hoping that our efforts have provided the access that the salmon need to move further up the tributaries to spawn. For more information on MSA’s beaver dam removal project click here! 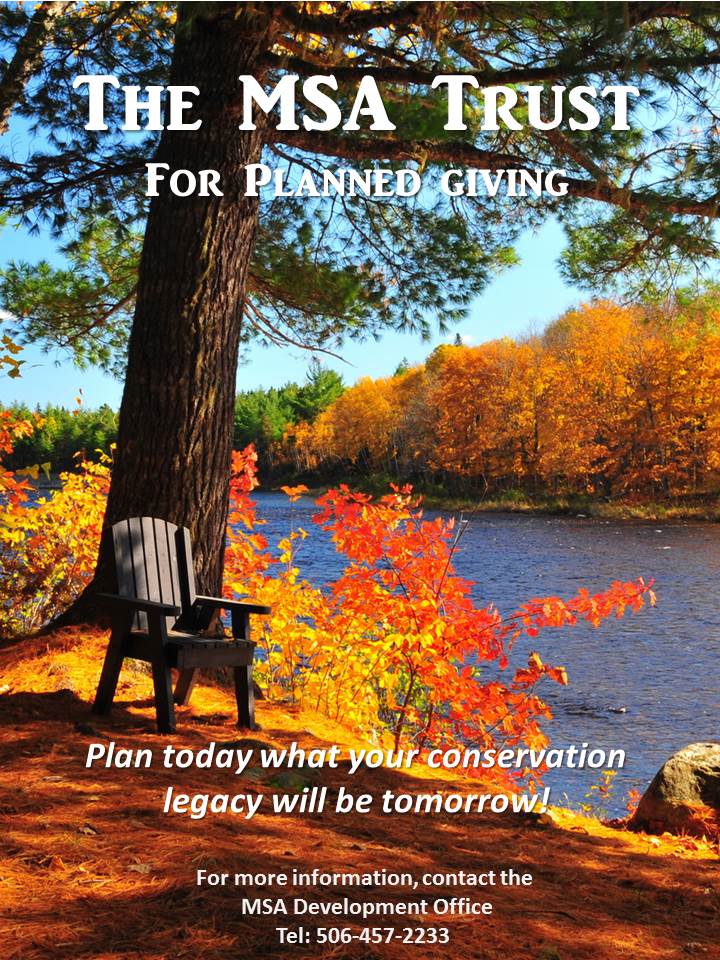 Still not a member of the Miramichi Salmon Association?

Membership in the MSA is the perfect way to express your passion and support for the Miramichi River, for the Atlantic salmon who make it their home, and for the vital work being done by the MSA to protect and conserve both for today and tomorrow!