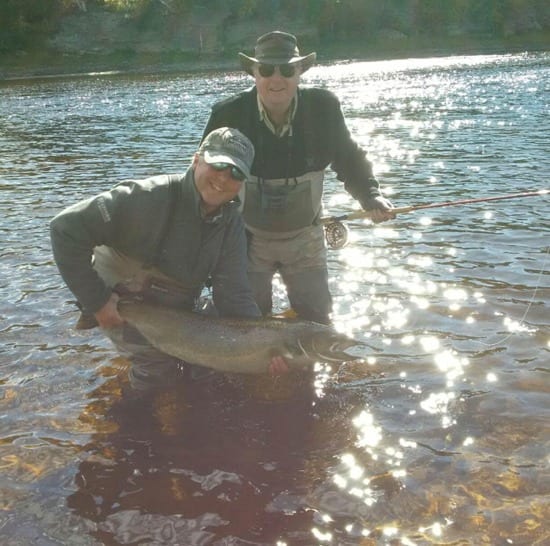 MIRAMICHI – The calendar has shed another page, and we are now into the final month of “fishing season” for 2017. With it being October, it is time for the final push to spend time fishing, as well as do some “Casting ‘n Blasting”. A bonus besides is experiencing the autumn colours which are beginning to paint the country-side.

This week has a very positive tone as a little bump of water has significantly improved fishing results. Have a great Canadian Thanksgiving Weekend!

W. W. Doak and Sons in Doaktown said angling had improved noticeably this week. The Blackville area received about a foot raise in water levels, while the Doaktown had about a nine-inch raise. This was enough to get fish moving and taking, as well as bringing in fresh fish with sea-lice. On Monday of this week, one angler in the Boiestown area landed four salmon ranging from 14 to 26 pounds. Another had hooked a 25-pounder. The water was dropping quickly, but the temperatures were very good. Bruce Waugh of Doak’s said when he checked his dog’s out-door water dish on Tuesday morning, it had ice in it.

Flies of choice were all over the place from small and dark such as Glitter Bears, Green Machines, Same-Thing-Murrays to big and bright with a variety of Shrimp patterns, General Practitioners and Marabous such as Green Slimes.

Andrew Anthony of Ledges Inn in Doaktown and Mountain Channel in the Rapids area said they were having good fishing, with even a few very fresh fish caught in the Doaktown area. The raise in water was allowing anglers to get some swing on their flies, but the water was dropping quickly, although water temps were very good.

Mountain Channel was fishing even better with a good mix of old fish and fresh fish being caught. Most catches were salmon, with some big ones in the 20-pound plus range. One unusual note was that on two days this week when grilse were caught there were more females than males. They are very close to reaching the 300 fish caught this season which is good considering the poor fishing conditions for most of the season. Their guests were also enjoying some hunting of grouse, Woodcocks and some pheasants (on their private reserve).

Flies of choice were ranged from no. 10 Green Machines to no. 6 Ally’s Shrimps, along with some Bonnie Bells.

Herb Barry Sr. of Herb’s Fly Shop on the Station Road in Blackville said anglers were catching some fish, and over all, fishing was decent. The water had come up about a foot, but had pretty well dropped back to where it was. However, the water temps were good.

Flies of choice were those with orange and yellow, such as Sally’s Shrimps, Tippet Shrimps, General Practitioners and L. T. Specials.

Curtis Miramichi River Outfitting in Blackville said the fishing had picked up and had been good since the weekend. One angler caught a 40-pound salmon while another had a 32-poundwer. There was a mix of salmon and grilse, with the edge to salmon, and good sized ones. Although the salmon were big, the flies were small. The water had dropped to low again, but the temperature was good.

Jim Laws of Miramichi Hunting and Fishing in Newcastle, Miramichi reported decent fishing on the Main Southwest which had about a foot raise in water. However, the Northwest Miramichi remains very low. However, Water temps were good and there were a few fish being hooked.

The striped Bass have been hit and miss as they return for the fall. There are a few more bigger ones, but the full run has not returned yet.

Flies of choice were Bombers and Fall patterns such as Ally’s Shrimps and General Practitioners.

Syd Matchett of Trout Brook Fly Shop on the Northwest Miramichi said the river was running every second or third day as it didn’t get the raise that other rivers in the system did. Nevertheless, there were a few fish being hooked here and there. Howie Gould caught a couple on Monday, and Mitchell Roberts caught his first grilse ever, after a long summer of putting in his time. Now he’s hooked for sure.

Flies of choice were small 10s and 12 s along with General Practitioners and Green Slimes.

Debbie Norton of Upper Oxbow Outdoor Adventures on the Little Southwest Miramichi said fishing was good. They had put their 22-foot Miller Canoe with motor on and were able to use it as it draws so little water. After the raise, the water was down again, but temperatures were good. This past week they had caught about 20 fish with a mix of salmon and grilse. Her guests were also doing some “Blast ‘n Cast as well. Over all, she said this week was the best Fall fishing they have had in three years.

Flies of choice were General Practitioners and Echo Beaches. Last week they were using Bombers, but it was back to wets this week.

So with the Fall scenery shaping up nicely, and less than two weeks remaining for most rivers in the system, it is time to get out and “on the water”.

CONDOLENCES: Our thoughts and prayers go out to Syd Matchett who lost his brother Kenny this week.

Thought for the Week: “Fishing is not an escape from life, but often a deeper immersion into it…” – Harry Middleton