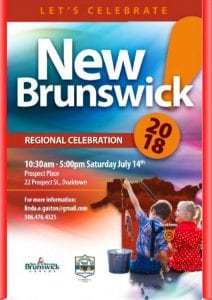 Come out one and all and bring a family member or a friend from 10:30 a.m. to 5:00 p.m. to the Prospect Place located at 22 Prospect Street in Doaktown on Saturday, July 14th, 2018 for the 2018 New Brunswick Regional Celebration

“We have lots to celebrate here in New Brunswick, including our beautiful landscapes, a growing economy and welcoming people,” said Premier Brian Gallant. “We encourage New Brunwickers to get out and explore all regions of our province this summer, including a stop at our provincial capital on New Brunswick Day.”

As was the case last year during Canada 150, the government will be offering an extension to New Brunswick Day celebrations by having five regional celebrations beginning on July 7.

Admission is FREE and serving hot dogs, water and cake.

Scheduled is as followed:

THE LUMBER JILLS (National Champions) On Canada’s East Coast there is a time honored tradition of fiddling and dancing. Down-easterners young people still preserve the music of their ancestors. A ‘lumberjack’ is a word long used to describe the men who conquered the vast Canadian forests and often would fiddle into the wee dawn. Now we introduce you to The Lumber Jills. The girls are all National youth championship female fiddlers and dancers, and have promoted their culture across Canada and Ireland. In September they will tour Belgium and France. All under the age of 20 years and with multiple awards for their heritage music and dancing; their Acadian, Scottish and Irish ancestry burns in their fiery traditional tunes from one of Canada’s smallest provinces.  https://www.youtube.com/watch?v=eqCw7fA4G0Y

GEORGE PAUL (ECMA  AWARD WINNER) George was born in Metepenagiag FN (Red Bank) along the Miramichi River in
NB where he still lives today. For over 30 years he has been involved with the Aboriginal Traditional Movement in reviving Mi’kmaw songs, stories, chants, and ceremonies. He communicates powerful cultural teachings to any age with his signature singing voice, honest good humor and a wealth of cultural knowledge. George, in his delightfully lighthearted way, gains his audience’s participation through music and discussion. https://www.youtube.com/watch?time_continue=10&v=rpUuTtI2W3A