How to Deal with Cyberbullying and Substance Abuse 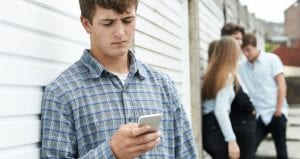 According to the Megan Meier Foundation—a foundation created by Tina Meier after her 13-year-old daughter, Megan, took her own life as a result of being cyberbullied—approximately 34 percent of all school-aged kids have endured cyberbullying at some point in their lives.

While many people think of this type of bullying as strictly a teenage issue, one study conducted by Pew Research Center found that cyberbullying isn’t something that stops upon high school graduation. In fact, as many as 40 percent of adult internet users indicate that they’ve been bullied in one way or another while they were online.

What Is Cyberbullying?
The Cyberbullying Research Center (CRC) defines cyberbullying as a “willful and repeated harm inflicted through the use of computers, cell phones, and other electronic devices.” Thus, in order for someone’s actions to be considered cyberbullying, they must be:

•Intentional,
•Occur more than once,
•Cause harm to someone else (whether actual or perceived), and
•Be conducted via a technologically-based source.
It is the fourth element—the technological source—that distinguishes cyberbullying from other types of bullying, some of which include physical, verbal, and sexual.

How Cyberbullying Happens
Kids Safety explains that there are several different “forms” of cyberbullying, or ways that one person can bully another online. Each one is designed to impact the victim in a different way.

Some of the most common forms include:

Sometimes the cyberbully’s identity is known by the victim, especially if they use their own online presence to attack the victim. Other times, the cyberbully may choose to set up a fake profile to hide who they are.

It’s also possible that the cyberbully doesn’t know the victim personally. This occurs in cases of “trolling,” which is when someone goes online with the intent of provoking a response by commenting on social media posts and in online forums in an effort to degrade or destroy the original poster’s credibility or self-esteem. Thus, anyone who spends time online is a potential cybervictim.

To read the full article to learn the warning signs and how cyberbullying is connected to substance abuse, visit: https://www.inpatientdrugrehab.org/cyberbullying-substance-abuse/