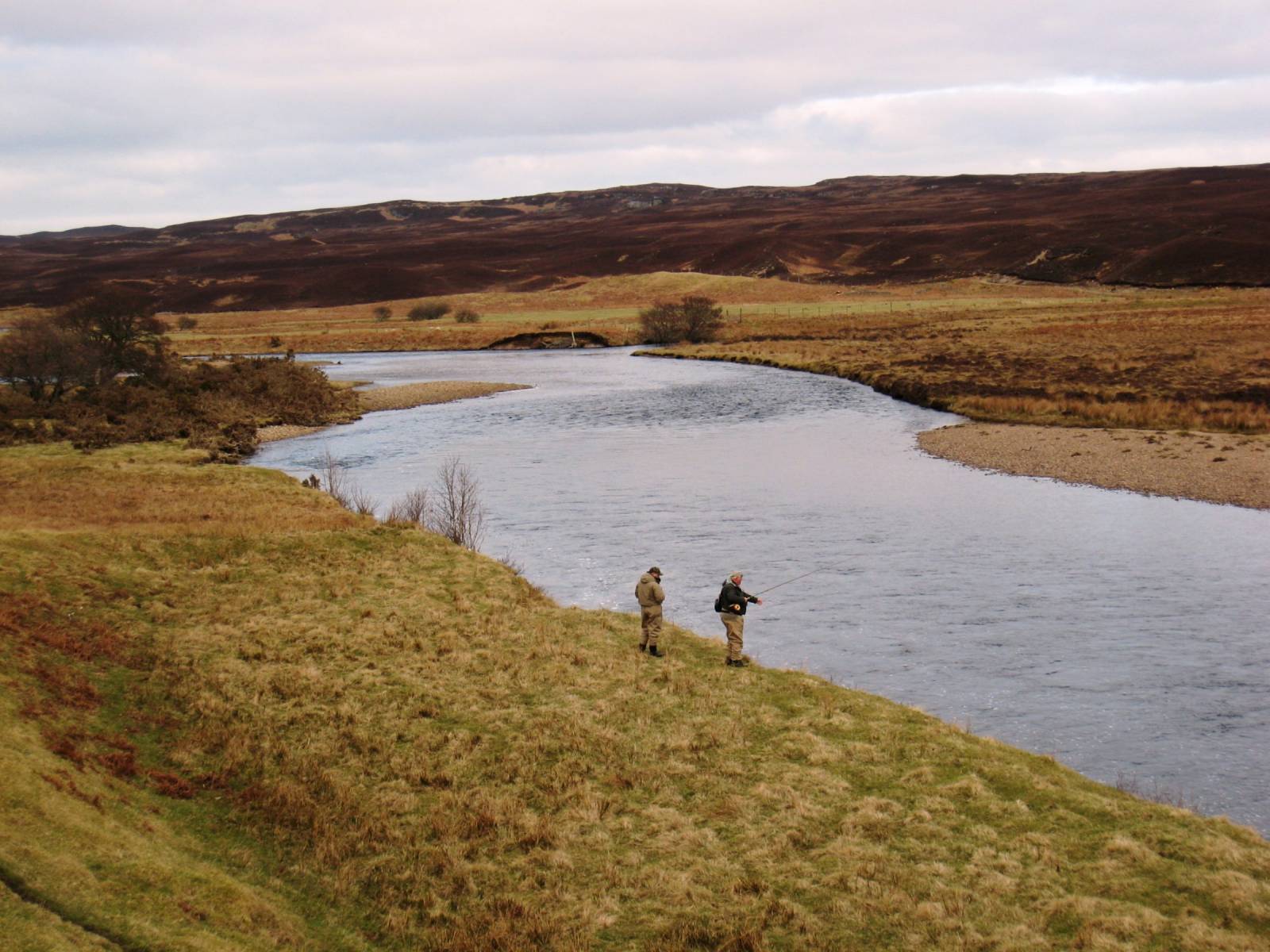 George Watson and his ghillie fishing the River Naver. 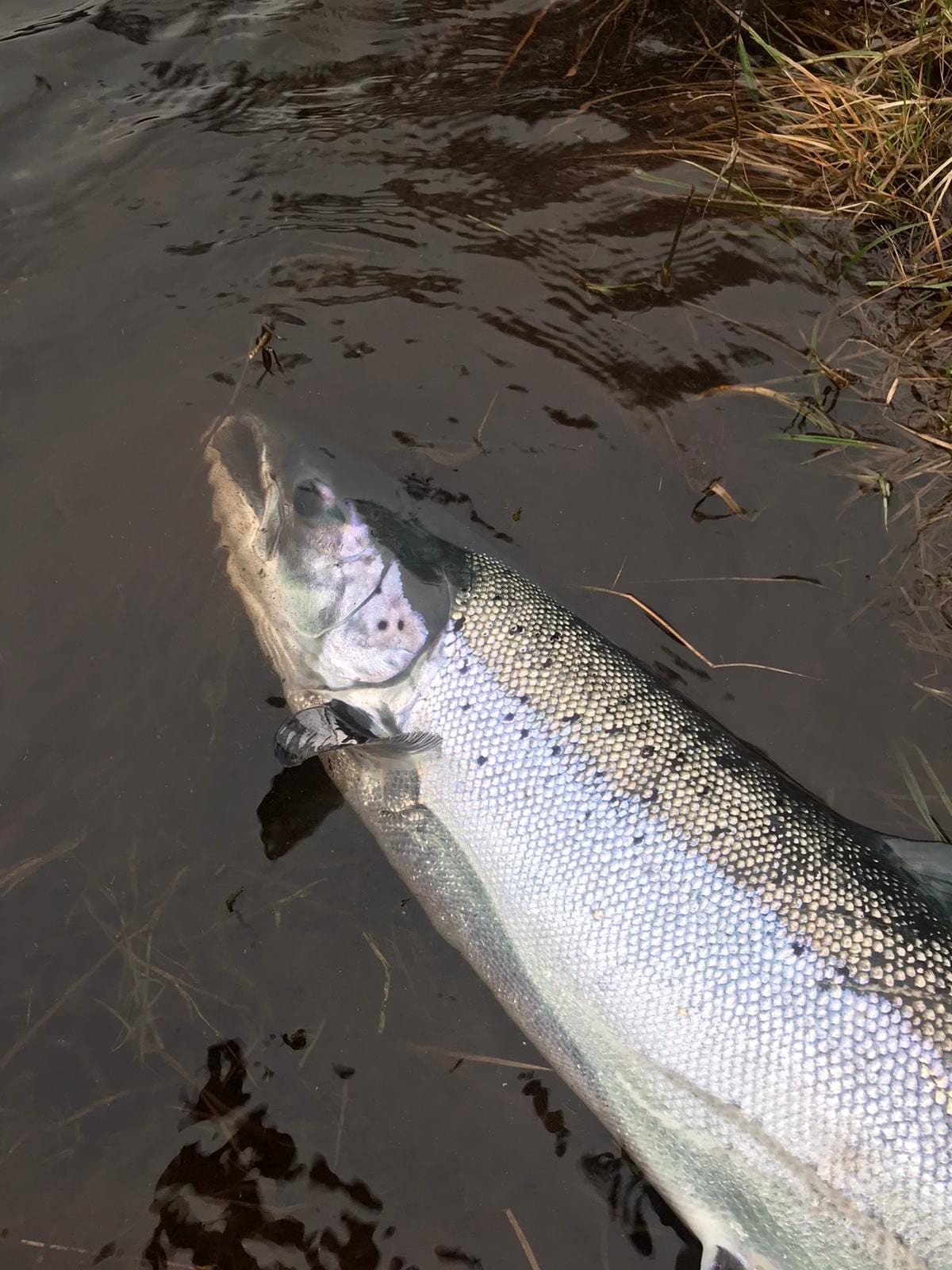 Fishing Friends –
How quickly things can change. Three weeks ago I was packed and ready for my annual salmon fishing trip to the River Naver in the northern Highlands of Scotland. The news about the corona virus had been building, but cases of it were still quite rare outside of China. My daughter Caroline, a registered nurse who is finishing up her nurse practitioner degree didn’t like what she was hearing, though, and over the course of the next week my family lobbied me not to go. Certainly Scotland was not the concern, but the airports of Boston and especially Heathrow in London where I was facing a 9 hour layover before flying up to Inverness were going to contain tons of people from all over the world.
I canceled the trip and gave away my fishing time to friends who normally fish with me on the river. In the short time since then everything has changed. Yesterday I would have been trying to fly back down from Inverness to London and on to Boston amid the various restrictions. I think I lucked into the right decision. The fishing report that I will now cover was pretty much par for the course at this time of year. That means that I would have probably hooked a springer or two each of my two weeks, and landed a few kelts just to keep things interesting. 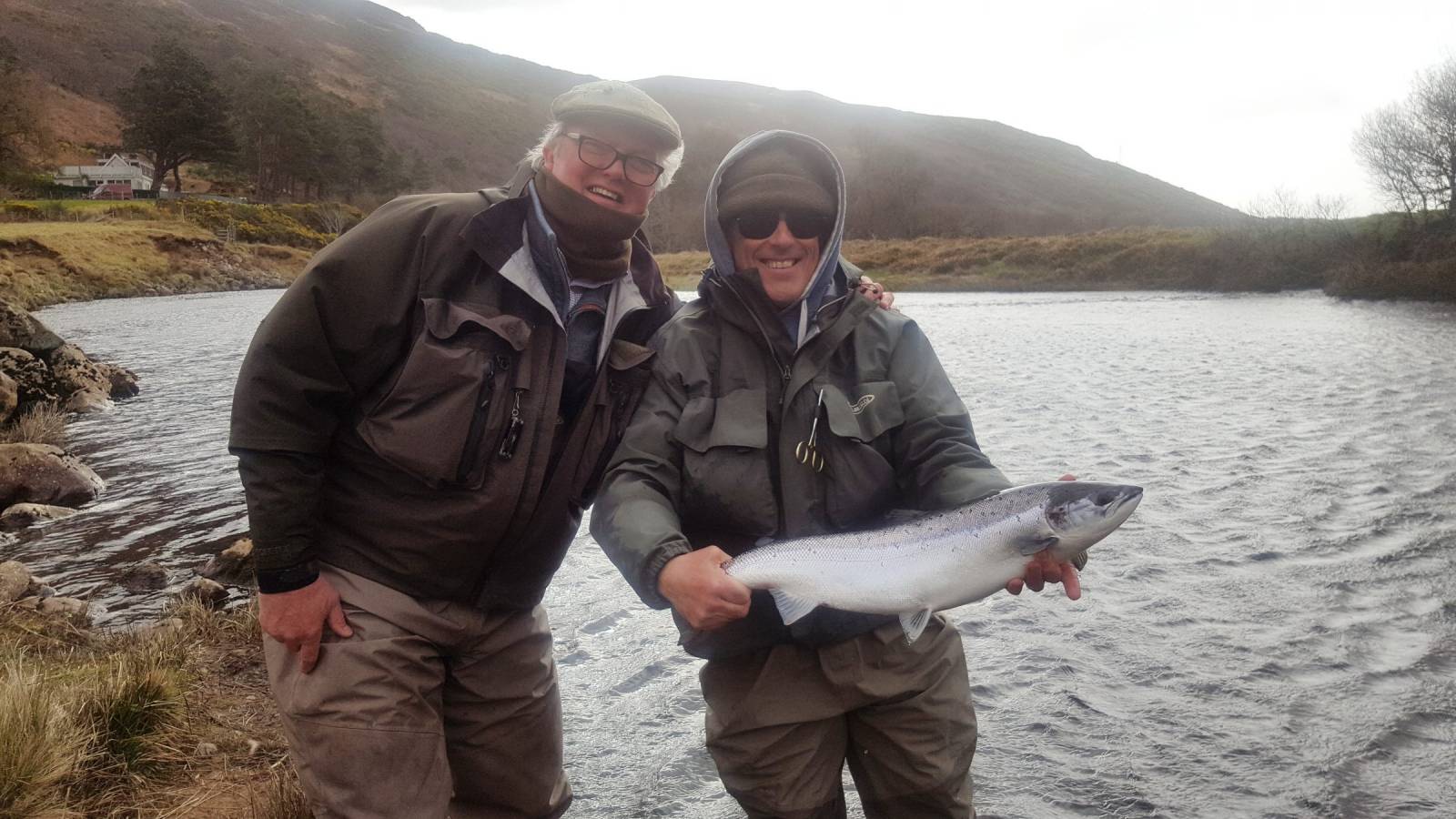 The ever jovial Colin Somerville on the Helmsdale with his ghillie holding a nice springer.

In Scotland essentially all salmon fishing is privately owned. Most beats are rented on a weekly and sometimes daily basis, and reservations are by your week’s number. The first Monday in January is the beginning of week 1– salmon fishing is not allowed on Sundays. Traditionally, as in most places in North America, if you fish a beat one year you are offered that beat the next year too. Since the first day of the week varies from year to year your reservation is actually by the number of the week. My first week of fishing has begun as late as March 6 in some prior years, and this year, with leap year, it was the earliest it has ever been, starting on Monday March 2. Since my long-time fishing partner on these trips, George Watson, has not been able to go, I now fish this week alone with my ghillie and an occasional visitor who comes over for the day. I have two beats for the second week, and Colin Somerville, a recently retired Scottish lawyer from Edinburgh fishes the week and divides the second rod up with some of his friends who come for one to three days each. I’ve written a lot about Scotland and the Naver in past blogs on my website. Just go to blog from the menu in top address bar of the home page of my site, and scroll back through the years. 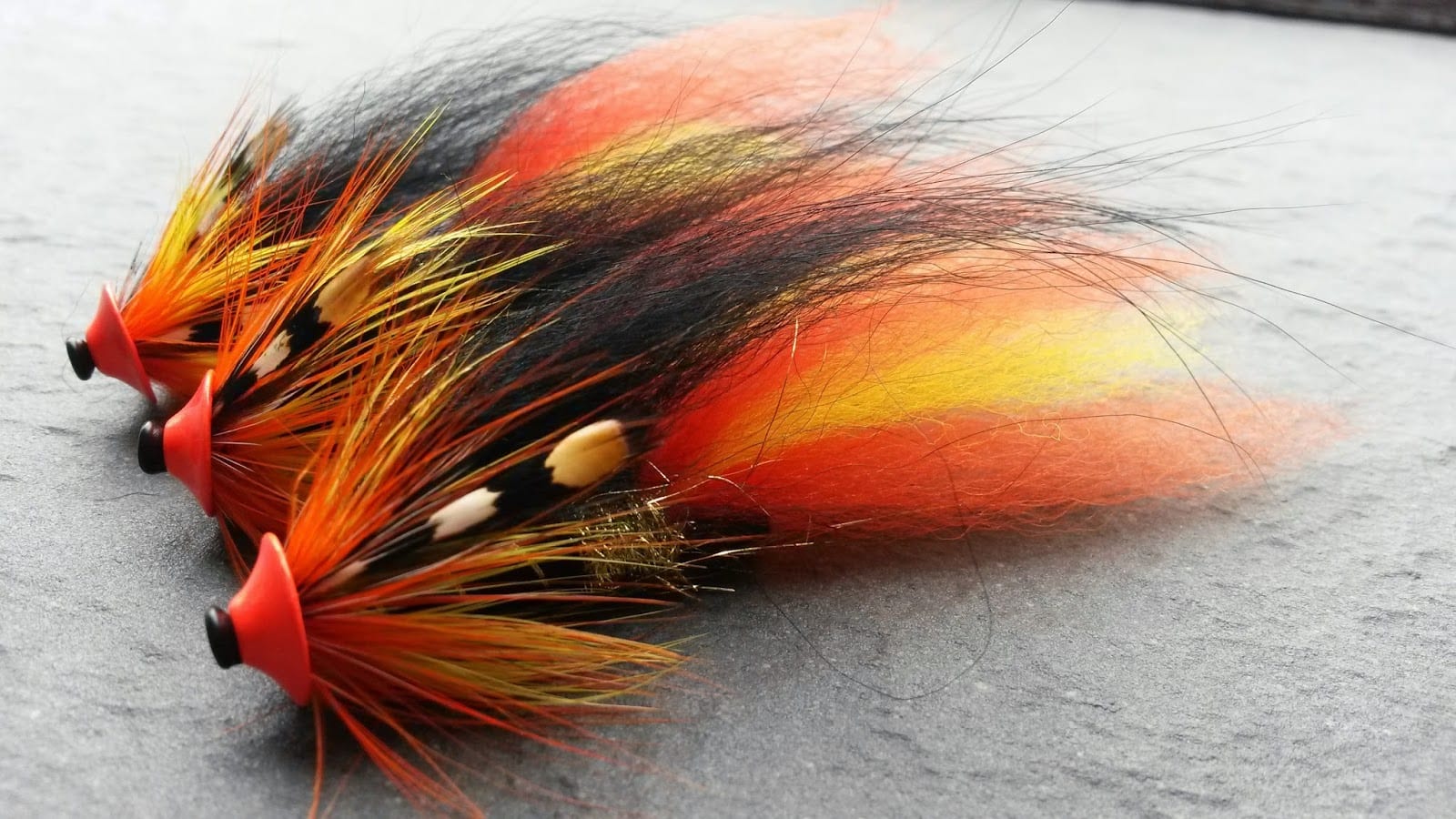 For week 1 I invited Pat Nicol and Nigel Griffith, life-long salmon fishers who live east of Altnaharra near the River Thurso where I first met them both, to fish my beat. Pat couldn’t make it but Nigel came over for a few days and had a terrific time. The Naver is rated as one of Scotland’s best fly waters with many streamy pools, and everyone loves fishing it. Nigel caught a few kelts, but on his last day, down at the bottom of the river in #6, the last beat above tide water, in a pool named the Cruives, he hooked a big springer. He and the ghillie guessed the fish to be high teens to 20 pounds and it tore up the place before getting off. According to Nigel “It took a 9cm Willie Gunn tied on a Medium TTT and boy did he make my Bogdan 300 sing!” The TTT is a tungsten turbo tube, the invention of Norwegian salmon wizard Michael Frodin. The tungsten tube helps the fly sink a bit on the retrieve without the help of a sinking line, and the turbo tip on the tube pushes a wake of water out of the way causing the tube to make a lot more commotion than other flies. This kind of fly is common in the UK, Europe, and Russia, but illegal on the Miramichi. The illegality stems from people weighting flies years ago to purposefully snag salmon, something that only very rarely happens on cast and swing fishing. 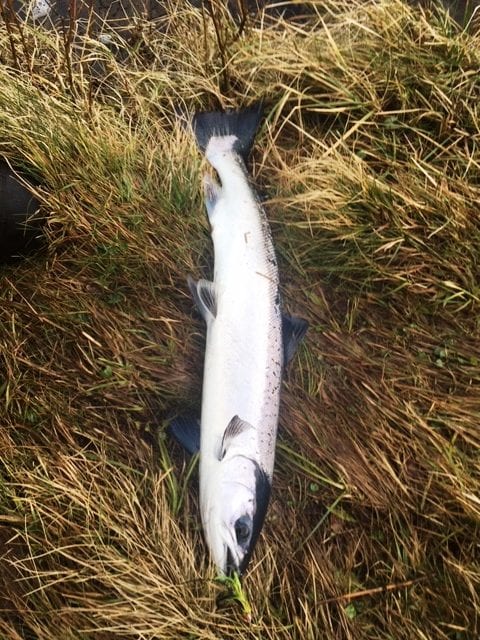 A well mended kelt, bright on its way back to the sea.

Week 2 began with a bang for Colin Somerville and Brian McAllister. Here is Colin’s rendition: “Hi Brad, good day, yesterday, on the river. One bottle of gin, one of Glenfarclas, 3 kelts to me and one 9lb springer to Brian! Brian’s fish came out of the Half Crown pool on Beat 4. Great day but we are missing our big American pal. Dave Horsburgh and Paraffin John are asking after you. Colin”
The second day was good too, and here is Colin’s report: “The river rose 8” overnight and we had to contend with heavy showers of rain and high winds; when the showers went through we had some lovely interludes though. We were on 5 and 6 and did nothing until I hooked a cracking springer towards the end of the day on the Wall on beat 5. Strongest fish that I have had on for some time (saw it twice and it looked to be in the high teens) and it was all over the place for 5 minutes, or so, before falling off. I was gutted but took solace from my big pal, Brian, aided and abetted by a bottle of Tamnavulin!”
The next couple of days were difficult with cold winds and even some snow. My friends left after fishing on Friday, but gave their rods to the ghillies who made the most of them on Saturday. Chris McWilliams managed a nice sea-liced springer – see video and picture – from the Ravigill Pool on beat 4. Colin also added that at the beginning of the week they had the prime springer beats of 5 and 6 on the lower river. The water was cold and the fish seemed to be holding down there and not running to the upper beats. That is not uncommon by my experience. During the latter part of the week the rods who had those lower beats did fairly well, and catches for the week were more or less normal. From what we can see of the larger rivers like the Dee and Tweed further south this is another very difficult year for springers; catches are slim.

Video link below of releasing a sea-liced springer.

CAST or the Collaboration for Atlantic Salmon Tomorrow hinted at some good news on their website. According to the site report CAST has proof that the adult salmon raised in the Miramichi Salmon Association hatchery from wild smolts and released in the Miramichi River spawned successfully with each other and with wild salmon, and that the resulting parr are essentially indistinguishable from purely wild fish. When David Roth of CAST gave his presentation here at our February dinner he hinted that he was confident this would be the results of DNA tests being conducted at that time, and apparently he was right. No actual details were provided in the report, and there may not be any until the report is published and commented on by other fishery scientists. Hopefully this information will be enough for DFO and First Nations to give the project their approval. Given the reduced state of the Atlantic salmon population, especially in the NW Branch of the river, the CAST program has the potential to very significantly supplement the population of wild salmon spawning. If as hoped the striped bass population has contracted somewhat these added spawners could be a big help because they will help send more smolts out of the river two and one half years hence.

The Miramichi ice-out time frame is anyone’s guess this spring. Looking at this week’s weather forecast we have a low in the single number F both this morning and tomorrow morning, and the week on a whole is slightly above normal for morning lows – thanks mostly to Thursday’s forecast, and slightly below normal for highs. All in all just a little bit below normal. The concern is that on Thursday we have temperatures in the 50s with rain forecast. All reports are that this winter’s ice is thinner than last, and there is a lot of snow in the woods. It might not take that severe an event to lift the ice and start it all down river.
Thanks for reading. We’ll start the regular fishing reports once the ice clears from the river. Brad Burns 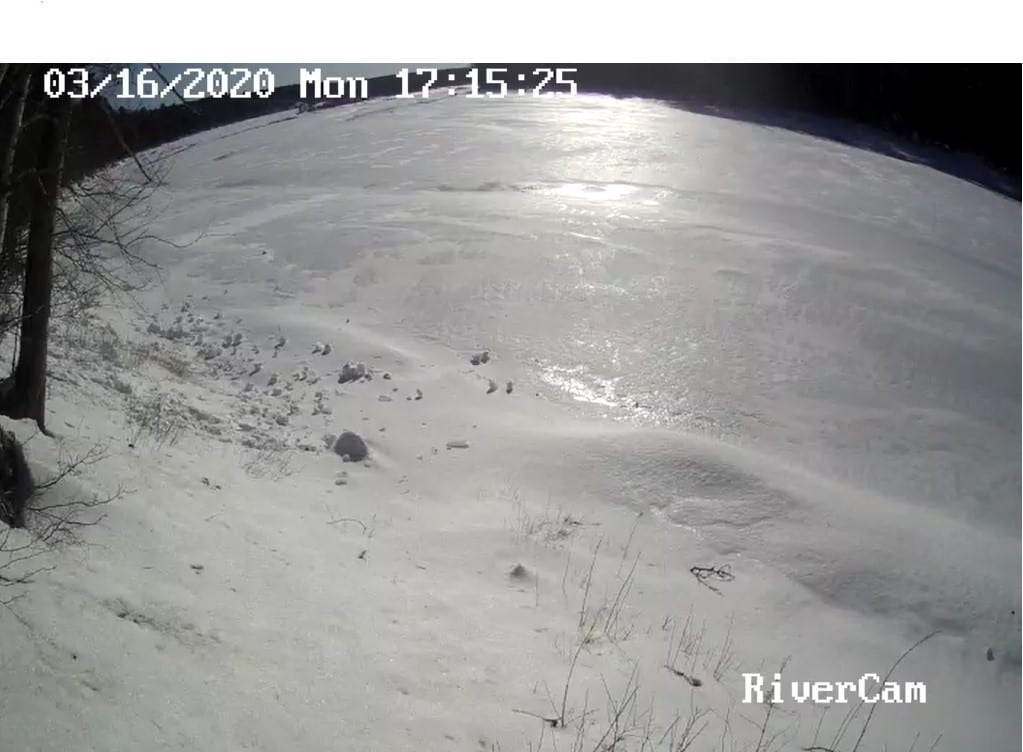 Bullock’s Pool Boiestown on the SW Miramichi. We have a ways to wait to fish this pool!