Fishing for Atlantic salmon on the Miramichi in 2021 continues to be good.  Fishing reports from up and down the river are uniformly upbeat. 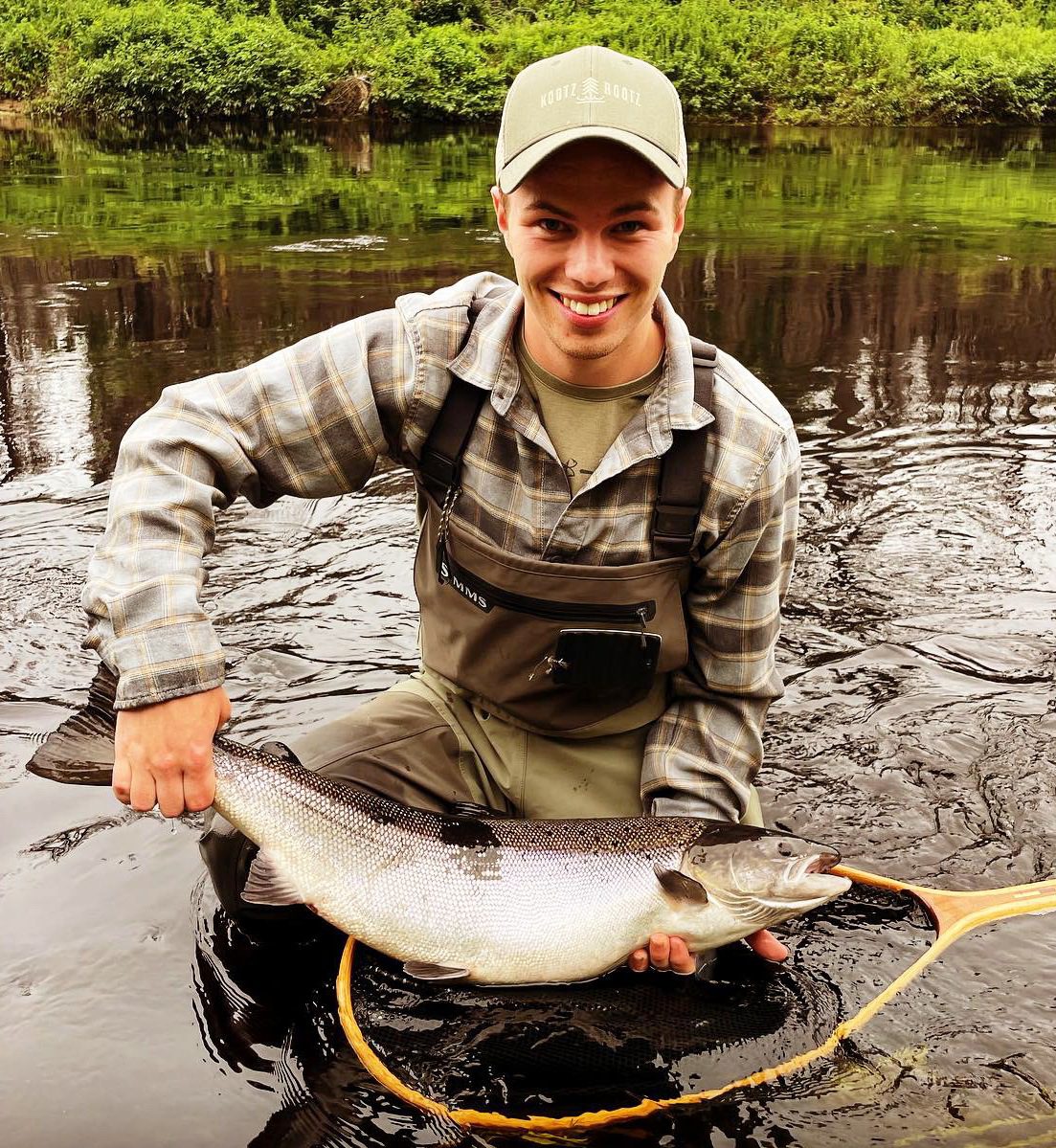 Eddie Colford, head guide BBSC with another nice salmon from this great pool.

Eddie Colford of the Black Brook Salmon Club said that fishing there had been good all year.  They had a party in recently, and Eddie said they hooked 15 in one day and rolled fish all day long.  One they landed weighed 20 pounds.

Wayne O’Donnell of Rocky Brook said that conditions were perfect, and there were a lot of fish in their pools.  Because of the high water levels he can’t really see the fish in the pools very well, and doesn’t know if there are more or less than last year up in his area, but fishing is very good.  They are catching most fish on either green machines or orange bombers.  Many people felt that last year’s run was also strong, but temperatures were too warm for good angling in the lower river.  This year temperatures have been consistently good up and down the river, and anglers down in the lower sections of the river – which runs warmer – have been better able to participate. 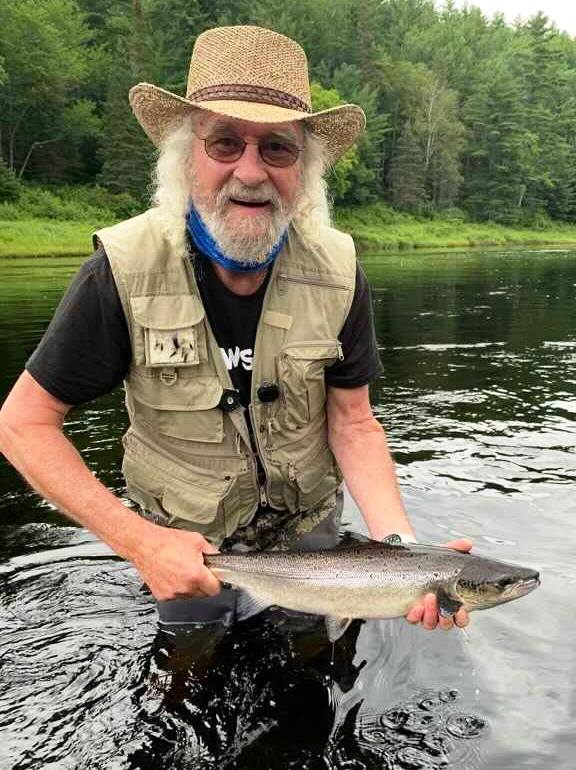 Bill Mather, a regular sport of Country Haven’s with a Cains grilse.

Byron Coughlin of Country Haven said that fishing was very good, but that due to such excellent water levels there was a lot of upriver movement of fish, and not as many are holding in the lower river pools as there would be in low water.

Jason, Jennifer and Jeff Curtis had good fishing recently both on the SW Miramichi and up in the Cains.  Just after the last rain, while the river was still high, Jason went out on the SWM for a few minutes one evening and hooked five including one that he said was an absolute monster.  We like hearing about monsters…  Salmon Brook and Buttermilk on the Cains have had a good number of what are for the Cains, early run fish.  Jason was working recently up at the Mahoney Brook camp, 20 miles up the Cains, when a salmon jumped right in front of the camp.  We almost never see salmon there until late September. 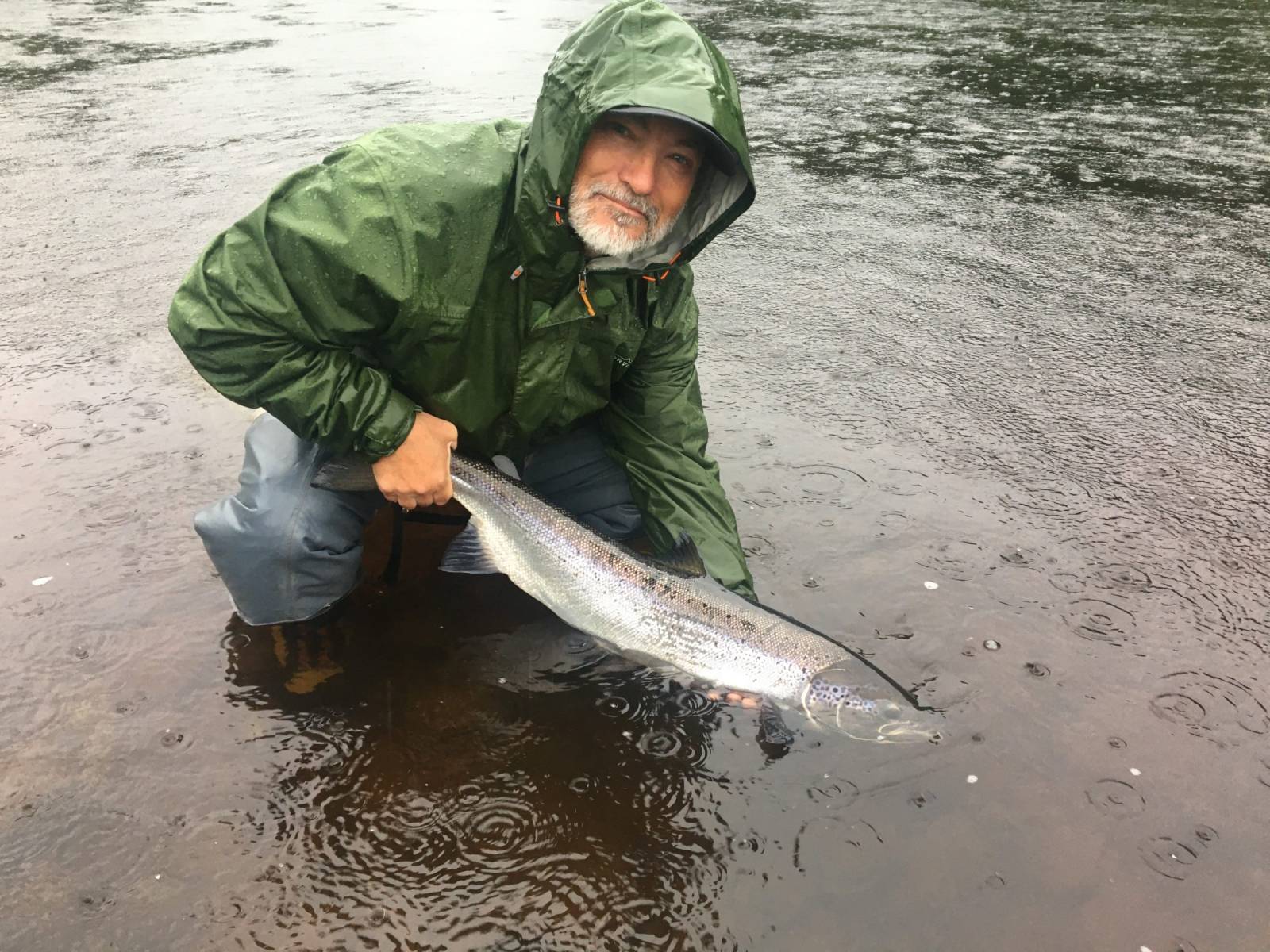 Jeff Curtis with a rainy day Cains salmon that he followed up with a grilse.

Marc D’Astous an independent salmon guide sent me in some nice photos from the Cains where one of his clients landed his first salmon.  Great video!  Video 2

The cool weather has definitely been helpful.  Last year most of the salmon running up the river were seen during periods of dawn and dusk.  This year there has been a lot of rain and cool, cloudy weather so that almost no fishing time has been lost to heat, and the fish have had great conditions to run the rivers.  I have been keeping an excel spreadsheet of the mean air temperature for the month of July for several years now.  When I first constructed it I went back to 1930 – I figured that was going back far enough – and recorded it for every decade up through 2000.  I switched to every third year between 2000 and 2014, and from 2014 to current I have recorded it every year.   The results are interesting.  As you can see there is no real obvious trend to this graph.  The average July temperature from all the years recorded was 19.48F.  The average mean temperature for the first year of each decade 1930 through 1970 was 19.44, and the average for the most recent five years was also 19.44.  The lowest temperature was this year, 2021 at 17.6, and the next lowest was 1950 when it was 17.7. 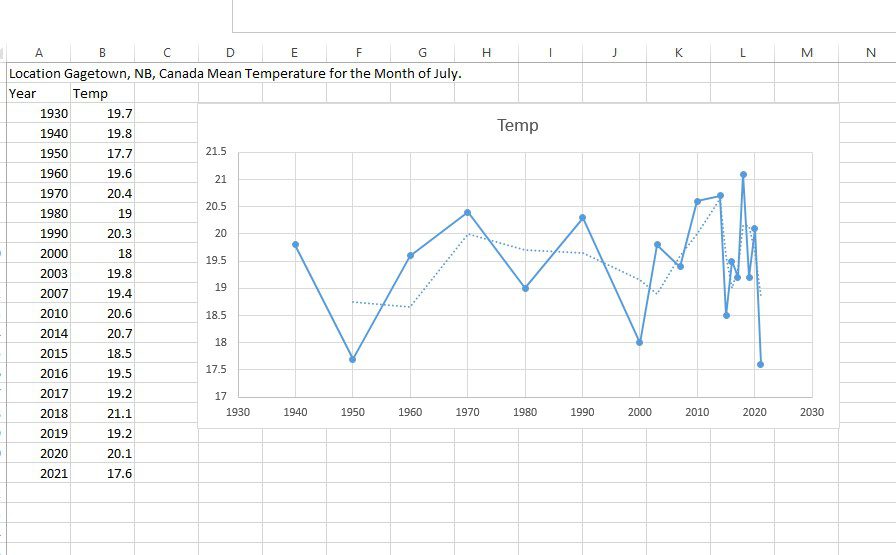 I have no grand comment to make on global warming, and it may be that in spite of July air temperatures being stable that water temperatures have increased due to forestry practices.  I don’t know.  But the observation that July, the hottest month of the year, has been quite stable over the last nearly 100 years is a pleasant surprise for me.

The Dungarvon and NW Miramichi barrier numbers are also encouraging.  Personally I have the most faith in what I see and experience myself or the reports that I get from people who I know to be trustworthy.  Anecdotally people have seen a ton of fish the last couple of seasons.  I’m also hearing some good comments about the increased number of parr people are seeing.  But having some hard numbers from the fish traps makes everything a lot more verifiable.

At the barrier on the Dungarvon that the Miramichi Salmon Assoc. is running this year for DNR, the combined count of grilse, small salmon, and large salmon is up from 145 fish in 2020 to 179 this year through July 25.  That is up 23%.  The NW Miramichi barrier – also run by the MSA – is up from 192 to 235.  That is also up 22% – very consistent.  On both rivers 2020 was also an up year which make these results even more impressive.

The numbers from the Millerton trap net are great improvements from 2018, 2019, the most recent years recorded, but they are still well below the better periods of the last 20 years.

It is possible that because of the higher water thus far this year that the trap has not fished as efficiently as it does in years of lower water.  This could be why the fishing reports seem to be better than the trap numbers.  We’ll have to see what the numbers look like for the rest of the season.   The DFO uses the tag returns to calculate the efficiency of the trap for the season, and therefore the numbers of fish in the run.  But we won’t have those results until long after the season has ended.

The Cassilis numbers on the NW Miramichi are about the same, relatively speaking, as they are on the SWM.  They are definitely up considerably over 2018/2019, but with salmon and grilse alike they are below the older numbers by a similar percentage as the SWMiramichi.

You can look over these trap numbers yourself at this link 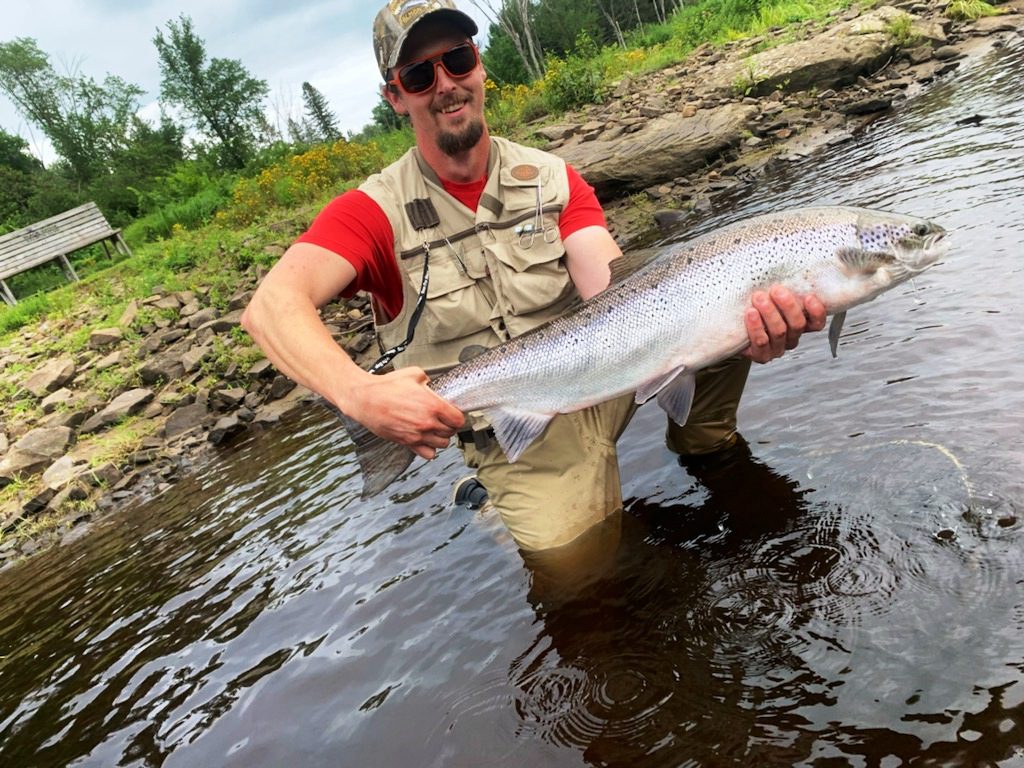 Bear in mind that both the Millerton and Cassilis traps catch only a very small and variable percentage of the salmon and grilse migrating up the river.

The border from the USA into Canada opens at midnight on August 9.  I currently plan to be there at that time, and I expect to have plenty of company.  I have no idea what I may be running into for lines.  There are a number of items that need to get up to the camp in advance of the fall season, so even though it is forecast to be a bit warmer, I’m going anyway.  It will be nice to visit the camp I haven’t seen in almost two years.  On Friday I’m going to try and figure out the ArrivCan phone app.  I’ll try and let you know how that went in my fishing report the next day.

The Miramichi Salmon Report on my website has been getting daily updates by me with short comments on the fishing and summary of water height, temperature, and fishing conditions.  You can view it anytime at this https://www.bradburnsfishing.com/miramichi-salmon-report/.

If you have any questions or comments please put them right in the comments section to follow.  I will see it and respond as may another reader.

Thanks for reading. Brad Burns