Skip to content
Connect with us:
FacebookTwitterInstagram
May 2, 2007/Giv'er Miramichi/Be the first to comment/Arts & Entertainment, Sports 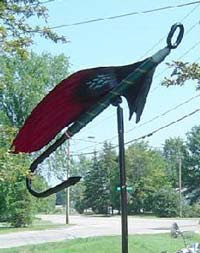 The Southwest Miramichi Council for Arts and Culture at Blackville, New Brunswick is proud to sponsor a fly tying contest for the development of a hair wing salmon fly in recognition of the Spirit of the “Dungarvon Whooper”.

The Fly Tying Contest is open to all fly tyers who inhabit the area along the Southwest Miramichi River and its tributaries between the Anderson Bridge at Miramichi City and Juniper, New Brunswick. All fly tyers within these boundaries are asked to submit their creation, to be named the “Dungarvon Whooper”, to the following address no later than June 15, 2007.