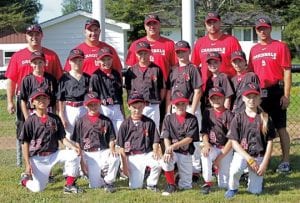 MIRAMICHI – Miramichi Minor Ball Association (Miramichi Cardinals) is pleased to announce the details of the upcoming Mosquito AAA Atlantic championship the weekend of September 16-18. Provincial champions from all four atlantic provinces will descend on Miramichi to contest the title along with the host Miramichi Mosquito AAA Cardinals.

All games will take place at Gretna Green fields, located off Kirkpatrick Street close to Gretna Green Elementary School. “Our volunteers and parents have been hard at work fixing up the appearance of the fields in anticipation of this event, says Association President Frank Aridano. Our two new wireless electronic scoreboards are installed and will allow players and fans to more easily follow the counts during games.” Aridano went on to say the association “is very pleased and grateful for the support shown by local individuals, businesses, and the city recreation department. We have had a great summer of baseball, despite the wet weather.”

The tournament will kick off on Friday at 1 PM with the battle of New Brunswick between the host Cardinals and the NB champion Fredericton Jungle Jim’s Royals on the upper field. The lower field will see the PEI champion Sherwood Knights square off against the Nova Scotia champion Halifax Braves. Newfoundland’s champion St. John’s Capitals will see their first action later that day at 4 PM against the host Cardinals, while Fredericton plays Sherwood. Round robin action will continue at both fields with game starts at 11 AM and 2PM Saturday, as well as 10 AM Sunday. Championship games (if necessary) are scheduled for 1 PM and 4 PM Sunday. Complete schedule details, as well as team player line-ups and team pictures are posted on the Miramichi Cardinals website. The public is invited to attend all games, there is NO admission charge.

Cardinal Coach David Hale thinks it is a great experience to have his young team playing in this event. “It’s good for the kids to see and be involved in these kinds of things. They have been hard at practice all summer, and they now get a chance to measure their development against the best in the region.” Having played himself in a similar event in 1986 and now coaching his son, Hale is pleased “to see how things have come full circle.” Hale credits his coaching and management staff of Jim Watters, Vincent Allain, Joey Savoy, and Nick Pitre with getting the kids ready for this. “We plan on taking a good run at it.”

Baseball NB President David Watling was all smiles when asked about this championship taking place in his hometown. “Miramichi has a long history of hosting championships at all levels of baseball. We win our share as well. With a good showing by the Ironmen at the Senior Nationals, and the Junior Ironmen taking their provincial crown, we are all set for the younger kids to show their stuff. I hope the public will come out and see our future senior ball players in action.”