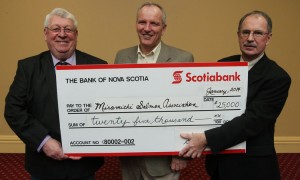 FREDERICTON – A campaign to raise money for long-term conservation efforts on the Miramichi River has soared past the $2-million mark and now may hit $3 million.

The campaign, known as “Miramichi Forever Funds,” is being run in both Canada and the United States. It marks the 60th anniversary of the Miramichi Salmon Association.

The fundraiser so far has received a total of 360 gifts and pledges totalling $2.4 million. The campaign was helped recently when the Bank of Nova Scotia donated $25,000 to the salmon association at a cheque presentation event in Fredericton.

Bud Bird, a director of the Miramichi Salmon Association’s fundraising drive and a veteran angler, says the Miramichi Forever Funds will provide a financial foundation for the salmon association for decades to come.

“It is an amazing response to a conservation campaign designed to establish long-term funding to ensure that future conservation on the Miramichi River for Atlantic salmon, and the watershed in general, will continue long after those of us who are now involved are gone.”

Bird, a tireless advocate for the wild Atlantic salmon, has witnessed the steady decline of the king of sport fish over his lifetime in New Brunswick.

“We’re all very concerned about the future of the Miramichi salmon – the runs are approaching all-time lows and the decline has been ongoing for (many years),” Bird said in a recent interview.

“But we don’t despair – the salmon is the symbol of the environment in eastern Canada and it’s a resource that we must simply find a way to save.”

There are a number of theories as to why fewer salmon return each year to their Miramichi spawning grounds, including increased fishing pressure off Greenland and predation by species such as striped bass and seals.

The campaign got a huge boost last year when the late artist Bruno Bobak, a devoted angler, bequeathed $400,000 from his estate for the salmon association.

“The cross-section of support is amazing,” Bird said.

“The magnitude of this campaign is really unheard of in this part of the environmental community.”

The intent of the Miramichi Forever campaigns, one based in Canada and another based in the United States, is to continue to receive and allocate discretionary donations, endowment contributions, long-term trust commitments and bequests from individuals, families, companies and institutions who want to ensure conservation on the storied Miramichi River.

Bird said the money will be used to create an endowment fund that will fund research and conservation programs well into the future.

“We hope as a result of this campaign we will be able to do a more intensive analysis of what is actually happening to the smolts, the young salmon as they go to sea, and what is happening from the time they leave freshwater and get into the estuary and into the bay,” he said.

“Early studies have indicated to us that frequently only half of the smolts that leave the head of tide get to the open ocean – so something is happening very significantly within the estuary, whether it’s predators, striped bass or seals, disease, industrial applications or whatever … we just don’t know and it deserves a great deal of studying.”

The Miramichi Salmon Association was formed in 1953 by conservationists from New Brunswick and New England wanting to protect and preserve the Atlantic salmon.

The group’s work covers the Miramichi River watershed, covering the main Southwest and Northwest branches, along with 37 tributaries and 7,700 individual small streams. The Miramichi watershed sees the largest run of wild Atlantic salmon in North America and as a result contributes $20 million and 637 full-time equivalent jobs to the province’s economy each year.