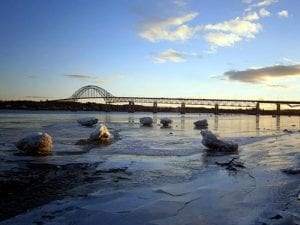 “Mini-burgs” on the Mighty Miramichi River. Photo by Jeff Pendlebury.

In the latest issue of the Giv’er Miramichi magazine, delivered free to Miramichi homes last month and now available at restaurants and shops all over the river, Jeff Pendlebury submitted a photo of what he refers to as the “mini-burgs” that appeared on the Miramichi River one morning in December 2013. It was an unusual sight for many locals! In case you missed it, we’ve uploaded a few photos Jeff captured of the burgs along with other scenic photos from the Miramichi River in our photo gallery. Click here to see all of Jeff’s photos.

“I simply love the area and what it has to offer as far as a lifestyle goes. We love getting out for drives with the camera and checking out some of the local natural splendor that is offered up around this area at every turn. I generally like taking nature shots, in particular sunsets and sunrises,” Jeff says.

Click here to see Jeff’s photos. If you have any Miramichi photos you’d like to share with Miramichiers living far and wide, upload them to our Mighty Miramichi photo gallery and maybe you’ll even get to see them in print in our next issue of Giv’er Miramichi!