Miramichi Fishing Report for Thursday, May 8, 2014

In a spring (dare I finally say that word?) that has been so late coming, many other things are late as well.  Fishing for Striped Bass is off to a very slow start with only sporadic reports of decent catches.  The general theory is that the water temperature has to warm up before the catching gets into full swing.  Let’s hope that theory holds.

Spring salmon angling has had its highs and lows, with more of these on the down side.  High water last weekend basically put a stop on most catching, but the fishing had picked up on Tuesday and Wednesday.

With the amount of snow still in the woods, it is felt that there should be another two weeks of spring fishing.

The hot topic at present is a public meeting and Open House between anglers and DFO taking place tonight (May 8) at the Newcastle Curling Club near French Fort Cove.  Details follow: 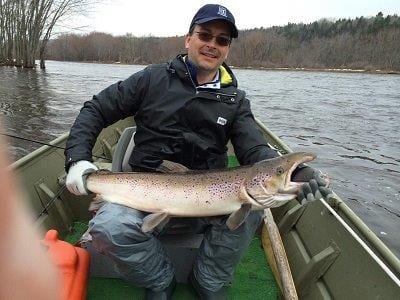 Derek Munn of Ledges Inn sends us this photo of Richard Urquhart with his first salmon a 40 inch hook bill. Tight lines!

Doug White’s Tammerack Sports Fly Shop in Juniper said there was not much going on up there. The river was high but quite clear for this drainage. Still a lot of snow in the woods, what little woods we have left, so the water will be high for awhile yet. Hopefully, there will be fishing by month’s end.  Of course that’s just a guess.

W. W. Doak and Sons in Doaktown said there were some fish around.  The weekend had been poor due to some high water, but conditions were improving as the levels dropped.  With the snow still in the woods, they felt there would be two more weeks of spring salmon fishing.  There was a 42-inch hook-bill caught in the Doaktown area.  Catches were more salmon than grilse.  The fish looked very good for spring and were putting up good fights.

Derek Munn of Ledges Inn in Doaktown and Mountain Channel in the Rapids area said angling there was pretty good.  The water was still a bit high and probably would stay that way as temperatures melt the snow in the woods.

Four of eight parties limited out this week with a lot of nice hook-bills being caught.  Munn described them as being shiny and in very good shape.  There was only the off report of a few winter trout being hooked.

Flies of choice were mostly Marabous and Black Ghosts.

Herb Barry Sr. of Herb’s Fly Shop on the Station Road in Blackville said from the reports he has received, angling has not been good.  One day he hears good reports and the next, poor.  Angling had been decent, but not great before last weekend’s rain.  One party of three hooked 10 fish with nine being salmon, but generally the catching has been on the slow side.

Curtis Miramichi River Outfitting in Blackville said weekend angling had been slow, but it began to pick up Tuesday and Wednesday of this week.  More salmon than grilse were being hooked.  ^The water was still a bit high on Wednesday.

George Routledge of George’s Fly Shop at the Mouth of Renous in Quarryville said that spring salmon angling was very poor.  There were a few big salmon being hooked on the Renous, but not a lot on the Main Southwest.  The smelts have been in at Quarryville for about a week, and he was expecting a second run of them soon.  He figured there were some trout being hooked around Doyle’s Brook because of the number of cars parked along the road, but he had few specific reports.  The water was still a bit high at Quarryville, and a bit riley with very few anglers out.

Flies of choice were the Renous Special and some Mickey Finns, Blue Smelts, Golden Eagles and Black Ghosts.

Jim Laws of Miramichi Hunting and Fishing in Newcastle, Miramichi reported not much angling of consequence.  There were not a lot of spring salmon being reported and very few Striped Bass to date.  The water was a little dark and still quite cold.

Flies of choice were Black Ghosts and Christmas Trees.

Syd Matchett of Trout Brook Fly Shop on the Northwest Miramichi said fishing was quiet with only a few spring salmon and the odd black trout being hooked.  The water was a little dirty and a little high, and probably would be like that for four or five days.  Syd felt that part of the high water was from Bruins Fans crying after Tuesday’s game.  On Tuesday, one angler picked up two 19-inch trout, a salmon and a grilse.  There were only a few locals and a few sports out.

On the Striped Bass front, a couple of anglers did catch a keeper each and lost one each in the Whitney area.

Debbie Norton of Upper Oxbow Outdoor Adventures on the Little Southwest Miramichi said angling had picked up since the weekend.  Anglers were catching mostly salmon which looked as if they had wintered well.  She saw one of the biggest female spring salmon she had ever seen.  The water was a bit high, but was clearing and dropping to a good height, but still on the high side.

Norton said that Mark Hambrook will be in the Red Bank Bridge area on the weekend trying to tag some kelts, so if anyone wants to help by fishing in that area, please contact Hambrook or the hatchery at 622-1781 for more information on how to reach his cell phone so the caught kelts may be tagged.

Anglers were catching some Striped Bass around the Whitney area.  One youngster hooked a nice 39-incher.

So, hopefully the weather and water warms up so the Striped Bass angling can get into gear as anglers get out and “on the water”. 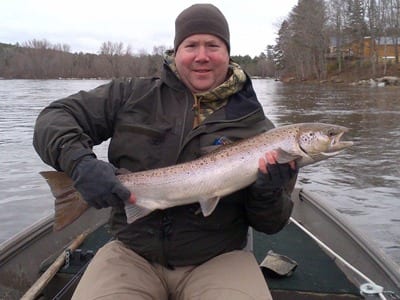 Shannon Fougere with a nice salmon, one of many he landed on the weekend.

Thought for the Week: “There are people who would rather cut off their toe with a hatchet than tie on the wrong fly.” Howell Raines in Fly Fishing through the Midlife Crisis

Live Blog – Next Tues. and Wed. (April 29, 30) ASF will live blog an International Conference on Land-based Aquaculture. The first posts should be up, with photos, by 9:30 AM. Check in regularly on the two days to read and see what is happening. The Live Blog will be at:
http://asf.ca/blog_1.html

Washington Post Delves into Land-based Salmon Farming – A major article this week in one of the U.S.’s top newspapers is focusing attention on the land-based research being carried out by the Freshwater Institute and ASF.
http://asf.ca/researchers-test-practicality-of-tank-farmed-salmon.html