Gradually we are moving into the angling season as most anglers know it. There are bright trout and bright salmon making their way into the system and the weather is making it desirable to be out. Rivers are dropping after high spring levels, and there are Black Flies. Ooops, I wasn’t supposed to say that!

Doug White’s Tammerack Sports Fly Shop in Juniper said the river is dropping nicely and although the sea-trout catches are sporadic they are there, in both branches. This weekend, the river could be the place to be after the extremely long winter. Please remember to be courteous to your fellow sportsmen. Take your turn though the pool and don’t go wasting time. There are only so many pools to go around, please share them.

W. W. Doak and Sons in Doaktown said water conditions were quite good. They had heard rumors of some sea trout and one apparent sighting of a jumping bright salmon, but there were no hook-ups to verify the proof of the pudding. They were hopeful that this weekend might produce some actual proof.

Flies of choice were Shady Ladies, Butterflies and White-tailed Green Machines, along with traditional trout flies such as Muddlers and Woolly Buggers. There had been some hatches reported, so some anglers were using some dry flies as well.

Derek Munn of Ledges Inn in Doaktown and Mountain Channel in the Rapids area said there was no one in camp this past week, but they will be getting into the flow starting today. Munn himself had been fishing on the Restigouche this week and things there were slow as well as they did not see any salmon. 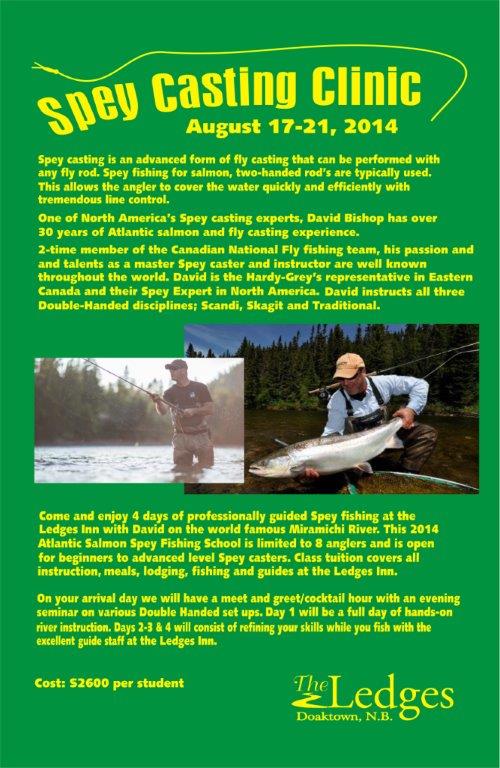 Herb Barry Sr. of Herb’s Fly Shop on the Station Road in Blackville said anglers were getting some trout, but not in great numbers. Some were saying they saw some bright salmon while others were saying there were none yet. He pointed out that according to most locals, early bright salmon rarely jump. You never see them until they are hooked. Water conditions were pretty good, maybe a tad high at Doctor’s Island, but fishable.

Curtis Miramichi River Outfitting in Blackville said angling there was quiet, with only a few trout being hooked at Quarryville. They had heard of a few bright salmon on the Northwest Miramichi, but none there yet. Water levels and temperatures were good and anglers were still able to run some boats along with canoes.

Flies of choice were Muddlers and Blue Elvers. 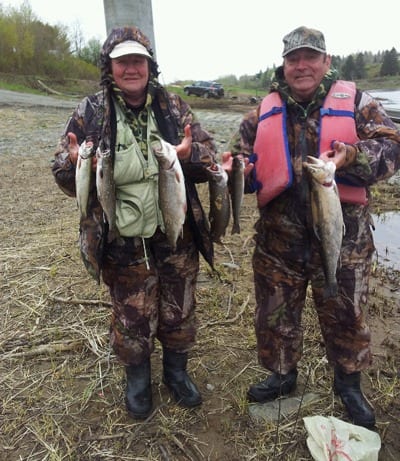 Raoul and Denise Cormier had a good day trout fishing below Quarryville Bridge on Tuesday May 27.

George Routledge of George’s Fly Shop at the Mouth of Renous in Quarryville said he was released from the hospital last Friday. He will not be in his shop this week until 10:30 a.m. Saturday June 7. He felt that the sea trout had pretty well gone by Quarryville, but anglers might pick up some on the Renous above the forks and above Doaktown on the Main Southwest. There were no reports of bright salmon there yet. Water conditions were pretty good, although still a tad high, but fishable.

Flies of choice were Muddlers and some Wulffs, along with Black Ghosts, L.T. Specials, Copper Killers and White-tailed Green Machines.

Jim Laws of Miramichi Hunting and Fishing in Newcastle, Miramichi reported hearing of a few bright salmon on the Northwest and the odd trout. There were not too many striped bass being caught as they were into full-time spawning, and not a lot of anglers were out fishing for them (now hook and release). Water levels were good and the temperature was good.

Flies of choice were mostly early salmon flies such as Black Ghosts, Undertakers and White-tailed Green Machines on nos. 4 & 6 hooks.

Syd Matchett of Trout Brook Fly Shop on the Northwest Miramichi said angling there was not great. There had been three bright salmon caught on the weekend and only a couple on big sea trout (one 22 and the other 19 inches).Syd had been out twice on the weekend, but saw nothing. Water conditions were excellent with one angler reporting it at 62 degrees Fahrenheit Tuesday morning. Syd said the Tree Swallows have been back, but the locals maintain that the brights are in when you see the Barn Swallows which haven’t been seen yet. As well, Syd himself had not seen any Yellow Butterflies yet, although one lady reported seeing one. This too is usually a sign that bright salmon are in the river.

Syd had a couple of good river stories this week. Apparently Guy Sorel had a lesson in how to start his outboard motor after taking it to the shop to be fixed when the repairman simply reached around and pressed the start button. And the stories continue with Guy and his fishing buddy Jamie Best. After finally getting the boat back to the river, Sorel asked Best if he had put the plug in the boat so the water wouldn’t come in. Best replied that he had done so, and off they went only to see water rushing through the plug hole. Apparently, Best had put the plug in as he had said, but it was in the wrong hole. The one in which he placed it did not go all the way through, leaving the open hole to supply the craft with a rush of unwanted water.

Syd was also told of a spey-casting demonstration by Ricky Harris. Sorel commented that anyone who followed suit would be guaranteed to be hooked for sure. Harris proved the point when a cast went through his thumb, causing him to drop the rod. When a good Samaritan retrieved the line, Harris had quite the jolt.

Flies of choice were Shady Ladies and Yellow-winged Butterflies on nos. 2 & 4 hooks.

Debbie Norton of Upper Oxbow Outdoor Adventures on the Little Southwest Miramichi said the summer is slowly getting here. She had heard of one bright salmon and one late spring salmon being hooked. There was only the odd trout report with one being 1 111/2 pounds. YThe smelt were all out as were the smolt. The striped Bass were in the spawning process. Water conditions were good and canoeing was good.

Fly of choice was the Green Machine with Butterfly wings.

As we move into the month of June, it is time for the rivers to come alive, so get out and “on the water”.

Thought for the Week: “…buying a fly rod in the average city store, that is, joining it up and safely waggling it a bit, is much like seeing a woman’s arm protruding from a car window: all one can readily be sure of is that the window is open.” Anatomy of a Fisherman by Robert Traver

A backgrounder pdf on the STATE OF THE POPULATIONS gives details of last year’s Atlantic salmon returns, and present risks
http://0101.nccdn.net/1_5/135/085/156/nasco-background2014v4.pdf

Bidding starts Friday June 6 at noon (EDT) and closes on Monday June 16 at noon (EDT). Of course, you can always make a Fathers Day Donation in his name & We will send him a personalized thank you letter.