The news is quite mixed again this week.  There was a very slight increase in fish numbers, but nothing even close to a run yet.  Then the temperatures began to rise, warming the water and basically putting an end to fishing.

The water became so warm the warm-water protocols were very close to coming into effect.  There had been over two nights when the water temperature was still 20 degrees Centigrade (68 Fahrenheit) in early morning.  When this happens, DFO will consider closing the designated cold water pools.  They were ready to do this, but decided to wait because there were thundershowers forecast for Wednesday and Thursday evenings, and substantial rain from storm Arthur, and cooler temperatures forecast for the weekend. They stressed that they really did not want to close anything if there were options available to keep it open.

An interesting tidbit this week was the catching of a porpoise in Albert Scott’s gaspereaux net which the MSA is renting to help get a better read on the numbers of salmon/grilse coming in.  This supplements the numbers at the trapnets at Cassilis on the Northwest and Millerton on the Main Southwest. 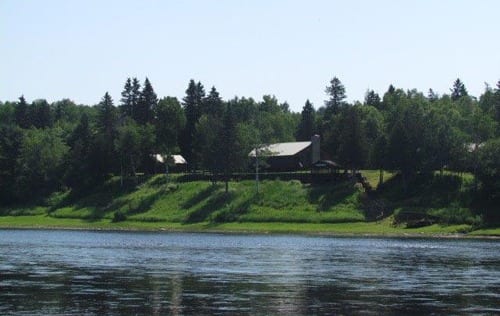 Doug White’s Tammerack Sports Fly Shop in Juniper said not much to report this time. The water is dropping off but a good rain will take care of that.  Only two salmon caught in a week but of course with the hot weather not many people are out. There seems to be an outbreak of bait fishing going on in the South branch and with no DNR and only two Federals to patrol the entire upper Miramichi drainage this isn’t going to stop anytime soon.  Expecting fishermen to look after the river is like giving the big sawmills control over the woodlands, it’s not going to work.

W. W. Doak and Sons in Doaktown said with the arrival of the extremely hot weather, angling had been pretty quiet.  Water levels on the Main Southwest were good, but very warm.  Tributaries were getting a bit on the low side and also warm.  There had been a few fish caught prior to the hot spell, including a couple of salmon estimated in the 25-pound range.  On the positive side, rain Wednesday night and cooler temperatures and more rain on the weekend should help immensely.

Flies of choice were Same-Thing-Murrays, Bombers, Bear Hairs, Butterflies and White-tailed Green Machines with no one fly better than the others.

Derek Munn of Ledges Inn in Doaktown and Mountain Channel in the Rapids area said there were not many fish going with the heat we’ve had this week.  Prior to that they were getting the odd fish last Friday and Saturday, but certainly no numbers of them.

Herb Barry Sr. of Herb’s Fly Shop on the Station Road in Blackville said he had hooked a 15-pound salmon, and there had been another salmon and a grilse hooked this past week, but generally things were pretty quiet.  The water was too warm at present, so anglers would have to wait for rain and cooler temperatures before there would be any improvement.

Flies of choice were Blue Rats (his salmon), Green Rats, Preachers and White-tailed Green Machines on primarily no. 6 hooks.

Curtis Miramichi River Outfitting in Blackville said anglers were seeing some moving and a few rolling with only a few being caught.  There was no great amount of fish.  The water had dropped quickly and was quite warm.  A good rain and cooler temperatures would be welcomed.

George Routledge of George’s Fly Shop at the Mouth of Renous in Quarryville we just finished a long weekend and there was not a soul fishing.  That pretty well tells the story.  Prior to the warm stretch anglers were hooking maybe a combined one or two a day in early morning or late evening.  This is extremely poor for the time of year.  George suggested staying off the water until conditions change, or if a fish was hooked and was to be released, it should not be played longer than a minute at most, or it would die.

Jim Laws of Miramichi Hunting and Fishing in Newcastle, Miramichi reported angling as very quiet on all rivers, including those north, such as the Nepisiguit and Restigouche.  The water was very warm and there had been no great amount of fish yet, with dribs and drabs each day.  He was hoping for a good rain and cooler temperatures.

Syd Matchett of Trout Brook Fly Shop on the Northwest Miramichi said angling was very quiet with no fish moving due to the warm conditions.  The water had dropped and an inch or more of rain would be welcomed.  Prior to the hot weather there had been a smattering of fish caught, but certainly in no numbers.  Rick Miller had hooked and released three grilse, 2 on Cossebooms and one on an Undertaker.

Debbie Norton of Upper Oxbow Outdoor Adventures on the Little Southwest Miramichi said they had caught a very few fish prior to the heat wave.  Her son, Bobby, caught a 15-pound salmon and a grilse, while Cameron Morrison from Halifax had hooked a grilse.  All three were on White-tailed Green Machines on the same day.

Fly of choice was, naturally, the White-tailed Green Machine.

So with some rain and thunder Wednesday evening, and more rain and cooler temperatures in the weekend forecast, it will be time to get out and “on the water”. 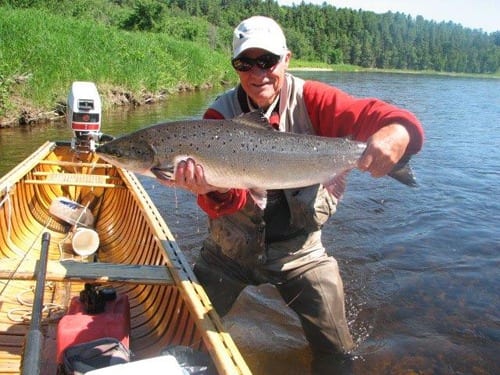 ASF Research Blog – an update on the activities of ASF’s Research biologists.
http://asf.ca/research-in-the-field.html

The petition that has been at the core of fighting the salmon netting has made a difference. More than 20,000 have signed on.