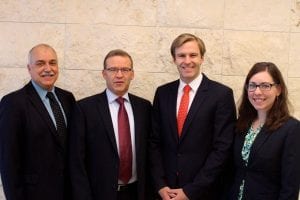 Premier-designate Brian Gallant announced a three-member transition team to liaise with the civil service in the period leading to the swearing-in of the new cabinet. From left: Don Ferguson; Len Hoyt; Gallant and Ellen Creighton.

Premier-designate Brian Gallant announced a three-member transition team to liaise with the civil service in the period leading to the swearing-in of the new cabinet.

“I am thankful that these three talented New Brunswickers have agreed to lead this important work,” said Gallant. “They have decades of experience in the private sector, governance and politics, which are all critical components in this transition process.”

The team members are:

Len Hoyt, Q.C.: A life-long resident of Fredericton, Hoyt serves as a partner and chair of the board at McInnes Cooper, one of Atlantic Canada’s largest law firms. Hoyt will serve as chair of the transition team, bringing his experience as a leader in the private sector to the process.

Don Ferguson: Originally from Tracadie-Sheila, Ferguson had a long career in the New Brunswick civil service before retiring in 2012 as deputy minister of health. Ferguson will focus on the non-partisan governance issues involved in the transition.

Ellen Creighton: Originally from Moncton, she articled with the federal Department of Justice and worked as an investigator and advisor at the Competition Bureau before returning to New Brunswick in 2013 to become executive director of the New Brunswick Liberal Association. Creighton will focus on the political organization of the premier’s office, government members’ office and ministers’ offices, and the implementation of the party platform to government policy.

“I thank Premier David Alward and the senior officials in the civil service for the positive work they are doing to make this a seamless transition of power,” said Gallant. “We look forward to continuing this process in the coming days to ensure New Brunswickers have an effective government throughout the transition process.”