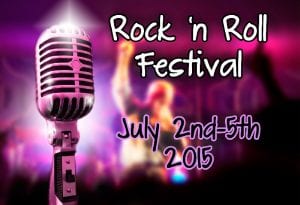 The Miramichi Rock ‘N’ Roll Festival will be returning this year after setting the festival aside for the 2014 season. The festival failed to run last year due to a lack of volunteers, but the event’s organizers have confirmed that Rock ‘N’ Roll will be back this summer with old favourites and new performers.

Festival organizers have asked the City of Miramichi for $50,000 to improve the festival and allow them to hold a wider variety of performances. Rock ‘N’ Roll Committee President Tim MacDonald says that most of the money will go toward a large (80×240 ft) tent to be used during the festival. The tent can be acquired as a one-time rental specifically for the festival, or purchased for continued use. Purchasing a tent would also allow the city to rent it to other events throughout the year.

A Rock ‘N’ Roll Themed New Year’s Eve Dance held at the Goodie Shop Lounge to support the festival was a great success.

“We thank everyone who volunteered and, of course, all of the folks who attended to make the fundraiser successful. It is always such an honour to have the support of the community both during the festival itself and throughout the year,” organizers said.

The fundraisers continue as a monthly party. The next one has an ’80s Theme and is scheduled for this Saturday, February 28th at the Goodie Shop Lounge. Costumes are always welcome. Tickets are $10 each and are available at the Goodie Shop Restaurant. Doors open at 8 pm.