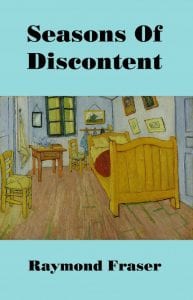 Miramichi’s own Raymond Fraser will be in town tomorrow to launch his most recent book. Everyone is invited to attend the official Miramichi launch for Seasons of Discontent at Saltwater Sounds, 1738 Water Street in the Historic Chatham Business District, from 1-2:30 pm tomorrow Saturday, April 25th.

Raymond Fraser is the author of 13 books of fiction, three of non-fiction, and six collections of poetry. His novel The Bannonbridge Musicians (1978) was runner-up to Alice Munro’s Lives of Girls and Women for the Governor General’s Award. Five of his books are listed in Atlantic Canada’s 100 Greatest Books. In 2009, he received the Lieutenant-Governor’s Award for High Achievement in the Literary Arts. In 2012, he was appointed to the Order of New Brunswick for his contributions to literature and culture in the province. Ray was born and raised in Chatham and now lives in Fredericton, NB.

Seasons of Discontent is published by Lion’s Head Press. Click here to read a review of book written by James M. Fisher.

“Raymond Fraser is a natural story teller. His talent with narrative is second to none in this country.” MICHAEL O. NOWLAN, The Gleaner

“I’ve had the pleasure of reading five of Raymond Fraser’s books over the past few years. A great storyteller and one of the country’s truly under-appreciated natural resources.” LAWRENCE CREAGHAN, The Write Stuff

“Reading Fraser’s writing is like listening to the voice of an epoch. He explores the things that made the sixties and seventies so legendary.”
MICAH O’DONNELL, The Aquinian