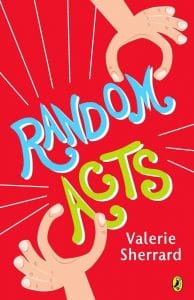 This young adult story concerns three “quintessential almost thirteen year olds” Zoey, Jenna and Bean who, after scarfing down a huge meal of pizza, garlic cheese fingers, Caesar salad, a dozen buffalo wings (which eventually get the blame), two litres of Pepsi and a tub of ice cream decide to do anonymous random acts of kindness to others after learning about a similar club being started by a rival schoolmate. They even sign a contract to make it all the more real and official. However, their simple, well-intentioned random acts result in a lot of unforeseen problems. One random act may have even caused the death of a well-liked History teacher!

This is really a comedy of errors, although at the time, none of this is funny to the three participants. The police are even called by a neighbour of Zoey’s because she (along with Bean) decided to rake up their leaves under the cover of night (because these acts are to be anonymous, remember) to surprise them in the morning. However, these particular neighbours wanted their leaves to remain on the lawn until spring. So they accused Zoey (once she confessed) of stealing their leaves! So you get an idea of how things are going with their “random acts”.

As I was reading (and enjoying) this YA (Young Adult) novel by Miramichi’s own author Valerie Sherrard, I couldn’t help thinking of a line from the movie Stand by Me: “I never had any friends later on like the ones I had when I was twelve.” Yes, at that age, you are typically in the same classes and likely have been for years. Soon, the high school years will come and friends may go separate ways, if not in the same school, or in a different one altogether. Even if you manage to stay close during those years, post-secondary education will certainly take friends in different directions, different cities, and different provinces. So the pre-teen years are ones of innocence as well as trying to adjust to a changing physiology and the leaving of childish ways behind.

As I posted on my site’s Facebook page, this story took me back to those wholesome Disney movies of the 60’s and 70’s (see The Parent Trap) which were directed at the teen demographic. Seems the kids were always scheming something, which would backfire but turn out OK in the end after adults came to the rescue. In fact, I can just see Dean Jones as Zoey’s psychologist dad and Suzanne Pleshette as her mother.

However, I noticed a disparaging review on Goodreads that called these kids “entitled” and that they were only doing these kind acts “to feel good about themselves rather than out of any sense of social responsibility.” Well, I don’t see it that way at all, and I think that particular reader missed the whole point of the story. These kids are really average, come from (as in Zoey’s case) a divided household (divorced parents) and from apparently middle income families living in a small town in Ontario. They are good at heart and I would not be ashamed to have any of them as my child. This story would have worked out well even if the participants were college-aged, or 30-somethings. As such, this novel should not be dismissed by the adult audience.

As Ms. Sherrard states in her acknowledgements: “On the subject of random acts of kindness, I’d like to go on record as being for them! Make the world a better place.” Well, Ms. Sherrard, YA writers like yourself are doing an act of kindness by providing novels like this for our young readers of today. While directed at the 10+ reader, I very much enjoyed it and I think every parent would likewise enjoy sharing this book with their child.

While not a New Brunswicker by birth, James M. Fisher has lived in Miramichi, NB for over seven years and feels quite at home there. James is an ardent reader whose aim is to highlight New Brunswick authors and publishers, as well as cover subjects of interest to New Brunswickers in particular and Maritimers in general.