This week’s report is very positive.  After the end of the heat last week and several rainy days this week, water conditions have improved.  There has been a general raise of water any where from 6 to 14 inches, and temperatures are down to the low 60s Fahrenheit.  And, there are fish! 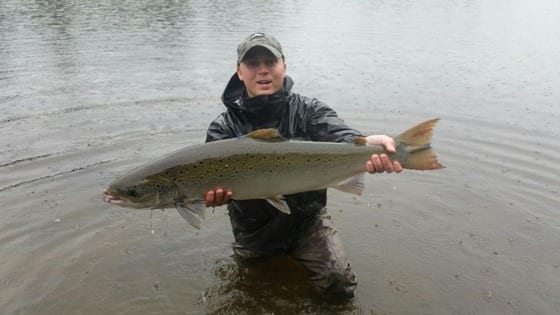 Byron Coughlan of Country Haven Lodge between Quarryville and Blackville said the river is full of fish   with close to 100 landed from Quarryville to the Mouth of Cains alone on Sunday.  Basically, everyone who is fishing since Thursday has been seeing more fish than they have in a long time.  So that sets the tone for this week.

Although most know that last week’s fishing closures have been cancelled, here is the official document:

Moncton – July 17, 2015 – Fisheries and Oceans Canada wishes to inform the public that the following salmon fishing pools will reopen to angling for all species of fish, due to improved water conditions and favorable forecast in the Miramichi River system. These changes will be in effect as of Saturday, July 18, 2015:

Please note that the following salmon harvesting pools will remain closed until December 31, 2015:

For complete details on these pools, please refer to Gulf Variation Order 2015-055. The Orders Registry is available online at: Orders Registry – Order summaries for existing fisheries

To report any suspicious fishing activity, please contact the nearest Conservation and Protection detachment in the Gulf Region or call Crime Stoppers at 1-800-222-8477.

Doug White’s Tammerack Sports Fly Shop in Juniper was not available for comment.

W. Doak and Sons in Doaktown said angling is certainly better than last week.  The water had come up a foot in the Doaktown area and about 1 ½ feet in the Blackville vicinity.  Temperatures were in the low 60s Fahrenheit.  Anglers were catching from Quarryville right through to Boiestown.  Late last week, one camp reported a 46-inch salmon and a 42-incher.  Generally, there was a good mix of salmon and grilse being caught.

Derek Munn of Ledges Inn in Doaktown and Mountain Channel in the Rapids area said angling had picked up after the warm weather left, and was very good.  Mountain Channel had landed 32 fish in three days, and as many more were lost and seen jumping.   The water temperature was in the low 60s Fahrenheit and had come up about 14 inches.  They were also catching in the Doaktown area.  With more rain this week, fishing should continue to be on the positive side.

Herb Barry Sr. of Herb’s Fly Shop on the Station Road in Blackville said the water was up and was a good temperature.  Anglers were seeing and catching decent numbers of fish.  With thunder showers Wednesday the water should remain fresh and at a good level.  A good mix of salmon and grilse were being caught.

Flies of choice were Green Rats, Preachers, Undertakers, Same-Thing-Murrays and White-tailed Green Machines on no. 6 hooks.

Curtis Miramichi River Outfitting in Blackville said there was lots of good news this week.  The water was up at least a foot and holding and the temperature of it had dropped to very fishable levels.  Anglers were catching good numbers of both salmon and grilse.  One salmon weighed in the 25-pound range.  Canoeing conditions were also good.

Flies of choice were those with blue such as Blue Charms and Blue Bombers, along with White-tailed Green Machines, Same-Thing-Murrays and Undertakers.

George Routledge of George’s Fly Shop at the Mouth of Renous in Quarryville said fishing was good with mostly grilse being caught, although there were some salmon in the 8-12 pound range.  The water had come up and had cooled.

Jim Laws of Miramichi Hunting and Fishing in Newcastle, Miramichi reported a raise of at least one foot of water with a corresponding drop in temperatures.  Anglers were seeing a lot more fish and doing some catching since the weather had cooled with a good mix of both salmon and grilse.

Syd Matchett of Trout Brook Fly Shop on the Northwest Miramichi said the water had risen and was now a good height and temperature, so angling should be good.  Anglers were reporting half decent catches along the system, but it was mostly from Crown Reserve and the camps as there were still not a lot of locals out.

Debbie Norton of Upper Oxbow Outdoor Adventures on the Little Southwest Miramichi said they had received a nice rain and more was on the way.  Water levels had come up at least six inches and the temperature of it had dropped.  They had picked up three grilse after the heat wave.

So with good water conditions and temperatures, as well as fresh fish coming into the system each day, it is time to get out and “on the water”.

Thought for the Week: “There is no greater fan of fly fishing than the worm.”  –Patrick F. McManus

Thanks for posting my note about missing gear. I’m happy to say my gear has been returned safe and sound!  Cheers…Matt Weir

Last week I decided to bring my 14-year old son, Theo, to Wilson’s and introduce him to Salmon fishing. We live in Montreal and spend time at our cottage in Cape Brulé every summer and decided to call Keith Wilson to try our luck on Friday July 10th. Are we ever glad we did! 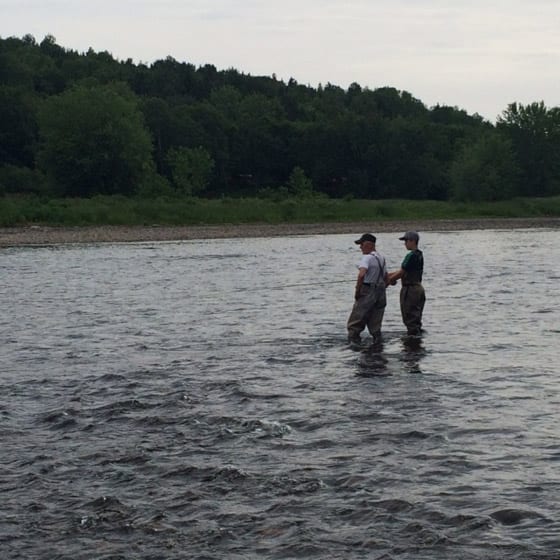 We arrived on Thursday night and were told that the water was low and water temp. was above 70 degrees F. Thursday evening produced no fish but Friday morning was a different story. We were on the water at 8am and by 9:15am we had hooked three grilse and landed and released two. Our guide Henry Stewart was a great help and wonderful company.

Great father and son day on the Main River.

The grilse were all hooked on a No.8 Green Machine with a bit of flashing in the tail.

Here’s a photo of yours truly with Henry Stewart with Theo on the camera. I am also including another snap of the river at Wilson’s. Great moments and memories for the future. 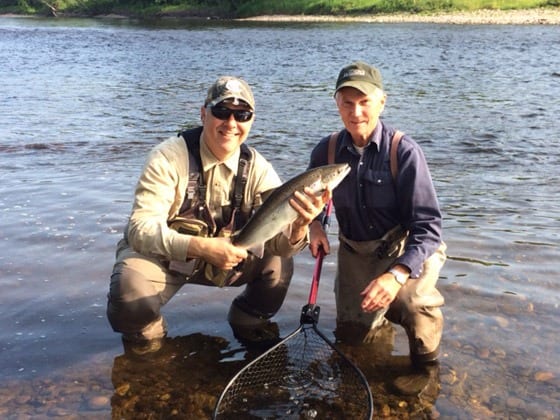 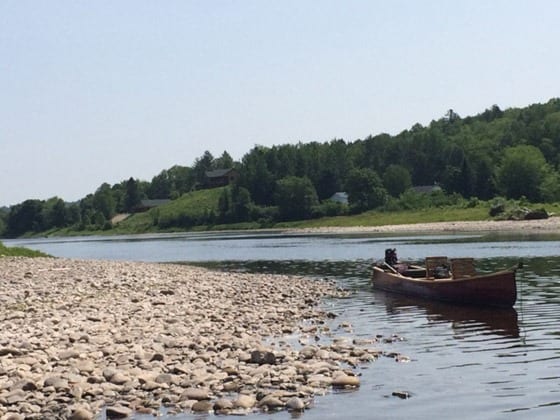 As a note of interest I wanted to share with you some very interesting results of a poll we are running on our website. The question was “Do you support the mandatory Live Release of both salmon and grilse?” The split was very close with just a few more in support that against.

Almost one quarter of respondents have quit fishing salmon because of the Live Release regulation. DNR reportedly has shown a marked decrease in license sales as well.

I must apologize for my quick e-mail last night but we were having internet problems at the office and I wanted to get the notice out to everyone. As mentioned DFO has closed 23 cold water holding pools on the Miramichi system. The protocol to reopen the pools is 2 days of temperatures below 20 degrees C – and the forecast would have to be favourable as well with cooler temperatures and/or some rain predicted. That said when I spoke with DFO on Tuesday they told me they were going to be closing the pools and thought it would be for a week or so based on the forecast – and they don’t want to have to issue variation orders every few days. To see the list of closed pools go to our website at Pool Closures.

Water temperatures at Doaktown reached a high of above 25C five days in a row and have been at highs of 24C and 23C the last two days. The salmon will undergo great stress at these temperatures and we encourage people to respect the closures.

Last night was the first night the temperature dipped below 20C in a week hitting approximately 18C. When air temperatures drop at night to 10 – 12 degrees, the water temperature does have a chance to get below 20 degrees and thus the salmon have a break.

To monitor the water temperatures a link can be found on our site at www.miramichisalmon.ca under Quick Links. The monitoring stations are at Doaktown on the Southwest, Upper Oxbow on the Little Southwest and at Trout Brook on the Northwest, and they update hourly to the site – 7 days a week.

I have not heard the numbers being caught by DFO at the Millerton and Cassilis traps but I know that due to high temperatures they have not been tagging any. Temperatures at our trap in Chatham have been hovering around 20C and the salmon we catch are still very lively. We will continue to watch and should the temperatures rise or the majority of fish seem to be in stress we will not set the net.

As mentioned previously we do not know what percentage of the total run is being caught in this trap but it would be reasonable to estimate we are catching 1-4% of the total number of fish going up the river. The fish we catch are being tagged and returned to the river as part of the Mark-Recapture stock assessment carried out by DFO. Any fish the crew feels are struggling are not tagged.

The crew is presently fishing the trap so I will report today’s numbers next week.

There was a large jump in numbers of fish making it to the traps the week of July 6th – 12th. And numbers are up compared to the same time last year at both barriers.

This time last year the Dungarvon Barrier had been washed out by the hurricane.

I have been getting reports of illegal netting and passing these on to DFO Conservation Officers. Unfortunately it is well after the fact and chances of catching someone is limited. They have requested that if people see or hear anything they suspect is illegal to call Crime Stoppers right away –  Crime Stoppers will then call the Conservation Officers and they will be able to investigate while the suspicious activity is in progress. The number to call is 1-800-222-8477.

I have been hearing good reports from both the Northwest and Southwest systems of fish being seen, hooked and caught. Our President just returned from Crown Reserve with his party catching 5 grilse over the two days.  Maybe those who have decided to give up fishing due to mandatory hook and release will get the bug again – yours in conservation.

A wealth of scientific and anecdotal information this week is finding interesting patterns of returns emerging. Read more
http://atlanticsalmonfederation.org/rivernotes/

A five-year study supported by a $125,000 grant is under way to better understand why Didymo or “Rock Snot” is expanding – and the impact on salmon populations. The Matapedia and Restigouche are central to the study.
http://asf.ca/scientist-to-study-why-rock-snot-proliferating.html