Like last week, we have another very positive report this week.  Almost every part of the river system is reporting very good numbers of fish in the system.  However, the fish are not taking as well as many anglers would like, or if they do, they are taking short as they are on the move.  This is not to say anglers are not catching fish, because they are.

Doug White’s Tammerack Sports Fly Shop in Juniper said he was away last week but didn’t change anything as far as the river report was concerned. The river came up about a foot, but since it was down three, it still is low. The biggest deterrent to fishing as I understand it is not being allowed to keep even one salmon, and that comes from just about everyone I’ve talked to. Because no one is fishing I really don’t see the point of me sending anymore reports as nothing has changed since June.

W. W. Doak and Sons in Doaktown said angling is pretty good, and has been for about the last two weeks, with Monday of this week being the best so far.  In addition, very good numbers of fish are being seen, although they are on the move.  The water is close to perfect and over all angling has been ideal for July with slightly more grilse than salmon.  Even if anglers are not catching, they know they are over fish. 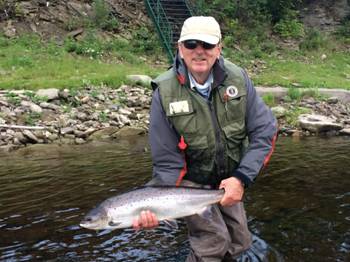 John McGuire with a nice fresh July salmon. Landed at one of Ledges pools on July 24th.

Derek Munn of Ledges Inn in Doaktown and Mountain Channel in the Rapids area said there are good numbers of fresh fish coming in daily and generally anglers are seeing lots of fish, although they are not taking as well as might be hoped.  There is a good mix of grilse and salmon, with one hitting the scales at 18-pounds.  Mountain Channel was fishing really well as it is more of a high water pool.  The water conditions were almost perfect, except for being a tad lower in Doaktown than at Mountain Channel.

Herb Barry Sr. of Herb’s Fly Shop on the Station Road in Blackville said the river is full of fish.  He had run the river from the Upper Blackville Bridge down to the Blackville Park, and said he’d seen more fish than he had in at least five years.  He estimated one salmon he saw would have weighed 30 pounds.  One nearly jumped into his canoe.  He did see one caught and knew of another angler that had limited out with a salmon and three grilse in a day.  Generally the fish were on the move.

Curtis Miramichi River Outfitting in Blackville said there were lots of fish around with a good mix of salmon and grilse.  However, they were not taking as well as expected.    Water was a perfect level and temperature.  Canoeing conditions were perfect. 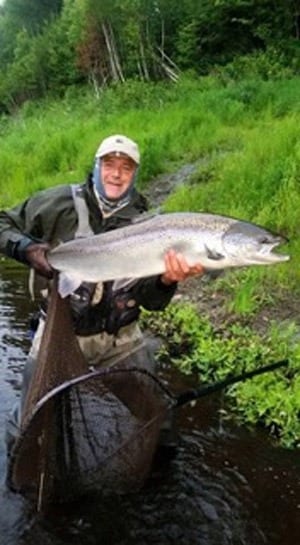 Steve Smith of the Miramichi Fly Fishing School with a beauty caught on a dry fly (blue bomber) on the night of the 24th near Blackville on the Main SW.

George Routledge of George’s Fly Shop at the Mouth of Renous in Quarryville said the fishing was good, with good numbers of fish around.  The water was a perfect height and temperature.  There was a good mix of salmon and grilse, and gradually the number of anglers out was increasing.

Jim Laws of Miramichi Hunting and Fishing in Newcastle, Miramichi reported decent numbers of fish going, although they were a bit fussy about taking.  There were not many local anglers out.  The water conditions were quite good.

Flies of choice were White-tailed Green Machines, and darker patterns such as Glitter Bears, Bear  Hairs, Shady Ladies and Undertakers.

Syd Matchett of Trout Brook Fly Shop on the Northwest Miramichi said angling was half-decent, depending upon who you were talking to.   Some are saying that this is the most fish they have seen in a long time, while are not so.  Syd knew of 15-20 fish caught this past week.  Both the clubs and Crown Reserve were fishing well, but there was a lack of local anglers on the river.  Water conditions were good.

Flies of choice were White-tailed Green Machines, Black Ghosts, Shady Ladies, and a selection of Bombers on nos. 4 & 6 hooks.

Debbie Norton of Upper Oxbow Outdoor Adventures on the Little Southwest Miramichi and her husband Dale were fishing the Restigouche River where angling was also reported as good.  They had caught fish themselves.

Upper Oxbow guide Brett Silliker said angling there was also good, with good numbers of fish being seen on all branches.  Their guests had landed five this week, but a lot of the fish were taking short and moving right through.

Flies of choice were Will Taylor Specials, and White-tailed Green Machines on nos. 6 & 8 hooks.

So with very good numbers of fresh fish coming into the system each day and good water conditions, it is time to get out and “on the water”.

Thought for the Week: “A woman who has never seen her husband fishing, doesn’t know what a patient man she married !”Anonymous

Hope you enjoy this blog post…it is chock full of salmon pics and videos after some great days on the Miramichi.  And I’m tickled to report that my blog has now had more than 100,000 visitors since I started it a couple years ago.  Woo-hoo!
http://theriverscourse.blogspot.com/2015/07/miramichi-salmon-camp-july-2015.html
Very best,
Gary Tanner