Angling was a bit slower this past week due to warm temperatures.  However, there are good numbers of fish around, but just not taking well.  Every day there are more fresh fish entering the system giving us so far quite a good year.  If we get Fall runs that follow this trend, we could have a very good year, especially compared to last.

W.W. Doak and Sons in Doaktown said angling this week was a little slower than last week, but anglers were still catching some and seeing good numbers of fish moving through the system.  The two weeks prior was simply tremendous fish between the Mouth of the Cains down to Quarryville.  Rain this past weekend helped some, and rain on Tuesday/Wednesday helped with water temperatures.  The forecast for the remainder of this week predicts cooler temperatures during both the days and nights, so that should be advantageous for fishermen.  Some were limiting out while others were catching some and seeing good numbers, so overall it is positive.  One angler fished about ten hours total throughout last week and landed ten fish.

Flies of choice were Same-Thing-Murrays, Glitter Bears, Shady Ladies and White-tailed Green Machines on no. 8 hooks with a few 10s.

Derek Munn of Ledges Inn in Doaktown and Mountain Channel in the Rapids area said they were getting a few fish, but fishing was not great.  However, they were seeing lots and had good fishing Sunday and Monday morning before the heat hit and angling slowed.  Mountain Channel had a good week, picking up 12-15 on the weekend.  A good rain and cooler temperatures would spark the fishing again.

Flies of choice were an assortment of Bombers (particularly blur & white and brown & white), and small wet flies such as White-tailed Green Machines and Shady Ladies on no. 8 hooks. 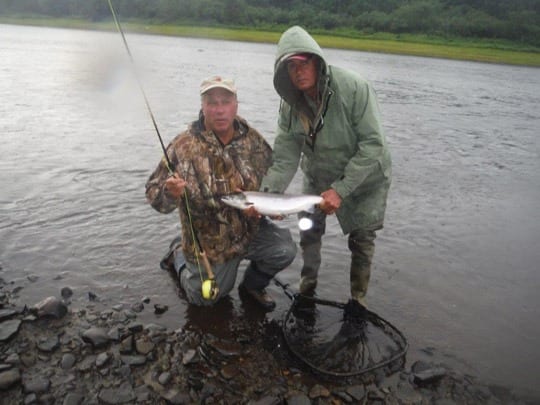 Thom Richardson with one of many fish he hooked and landed at Mountain Channel last week. They been having a record breaking year at the Channel.

Herb Barry Sr. of Herb’s Fly Shop on the Station Road in Blackville said there was not much to report.  The water was low and warm and the fish were not taking as well as anglers might like, although a few were being hooked.  The good part was that they were seeing lots of fish.  He felt a good rain and cooler temperatures would really perk up the fishing.  With very few locals fishing, it was hard to get a really good read on the angling.

Flies of choice were an assortment of Bombers along with wets such as Preachers, Undertakers, Green-butt Bear Hairs and Shady Ladies.

Curtis Miramichi River Outfitting in Blackville said anglers were getting a few, but seeing lots.  The water was low and warm, so the fish were not taking well.  The cold-water pools were pretty full.  Canoeing conditions were great.

George Routledge of George’s Fly Shop at the Mouth of Renous in Quarryville said fishing was not bad.  There were lots of fish around, but they were not taking well as the water was warm and low.  However, the level of water had improved some, but still had a ways to go.

Jim Laws of Miramichi Hunting and Fishing in Newcastle, Miramichi reported decent numbers of fish around, but they were not taking well as the water was down and warm.  A good rain was needed to freshen the rivers and make the fish more active.

Flies of choice were White-tailed Green Machines, Shady Ladies and some Bombers and Dry Flies.

Syd Matchett of Trout Brook Fly Shop on the Northwest Miramichi said angling was pretty good for the number of anglers out.  One sport limited out two days in a row.  Derrick Johnson landed a salmon and two grilse on Sunday.  Omar Depres and Lynne LeBlanc landed five on the Elbow Crown Reserve stretch, including Lynne’s first ever.  A couple of local anglers landed five between them on Wednesday. Rain on Saturday gave the river a decent raise in water

Debbie Norton of Upper Oxbow Outdoor Adventures on the Little Southwest Miramichi said fishing was good this week.  Jimmy Laub from Pennsylvania hit a pocket of fish over six days landing two salmon and 13 grilse. Trent and Angel Bacon of Nunivak hooked a grilse each and several other guests picked up fish as well.  The water had been down, came up with the rain Saturday and went down again, but the temperature was decent, so over all it was a positive week.

Flies of choice were Shady Ladies and White-tailed Green Machines.

So get out and “on the water”.

Thought for the Week: “The charm of fishing is that it is the pursuit of what is elusive but attainable, a perpetual series of occasions for hope.
~ John Buchan

Great numbers at the traps! The Cassilis trap has had great numbers over the past two weeks with a high of 138 fish in one day. The Millerton trap is not doing as well but fish are still moving with some of the camps on the Southwest Miramichi reporting the best fishing they have had in 10 years. These traps catch about 7% of the fish going up the river. The gill nets have not been in at Red Bank all season and have been out at Eel Ground since June 13th.

You can check out the trap and barrier numbers the middle and end of each month – these can be found at http://www.inter.dfo-mpo.gc.ca/Gulf/asir/count?period=0615&group=1 or click the DFO Salmon Counts Quick Link on our home page. July 31st numbers should be interesting.

This is just our second year fishing the trap net near the Chatham bridge and last year we had some issues so we really don’t have anything to compare our results to. That said we are very happy with the numbers of fish we are getting. If we are correct in assuming we are capturing 1-4% of the fish going up the river then the 139 fish caught today represents between 3475 – 13,900  fish moving by today. The fish we catch are being tagged and returned to the river as part of the Mark-Recapture stock assessment carried out by DFO.

Numbers are up at the barriers.

This time last year the Dungarvon Barrier was up and fishing again but we had lost two weeks of catch.

I have been getting reports of illegal netting and passing these on to DFO Conservation Officers. Unfortunately it is well after the fact and chances of catching someone is limited. They have requested that if people see or hear anything they suspect is illegal to call Crime Stoppers right away –  Crime Stoppers will then call the Conservation Officers and they will be able to investigate while the suspicious activity is in progress. The number to call is 1-800-222-8477.

Yours in Conservation, Nola

FACEBOOK members – We need your help:
Please go to Facebook and share our ad to alert as many anglers as possible of the need to report illegal killing of salmon to NB Crimestoppers. If you have not liked us on Facebook, do so and share. Thanks!
https://www.facebook.com/AtlanticSalmonFederation