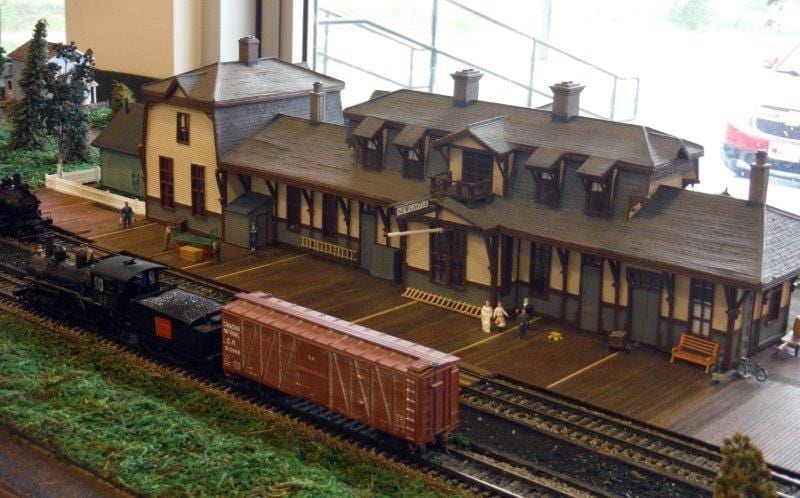 The Miramichi Area Model Railroad Society are a small group of like-minded train enthusiasts who got together five years ago and decided to form a group. They began by meeting in one member’s basement and another member’s garage. Now their permanent clubhouse is upstairs at the Seaman’s Hospital in Douglastown where they house their very impressive layout.

The layout is approximately 60′ x 15′ with double track mainline. The club has a large collection of Canadian National, Great Northern, and big American steam like UP Big Boys, Challengers and even a Virginian Tri-Plex. In addition, to being historically accurate the group’s humorous side can be easily seen throughout the display. Some of the buildings are assembled from kits, but many are made entirely from scratch. They pay close attention to detail as they strive to be as realistic as possible by doing things like putting rust on an old steel building or dried cement on a rail car at the cement plant.

The group meet every Wednesday at 7 pm starting in September. Anyone interested in trains, modelling, or the history of the Miramichi is invited to come and join them. They welcome young or old, experienced or not. The group currently consists of Pat Nolan, John Cooper, Joe Allen, David Foley, and Nick Walz.

“We are not getting any younger and would like to have new members to ensure the club continues,” David says. The group is eager to pass on their knowledge, skills, the layout, and everything the club has to offer.

Four members of the club recently built dioramas to take part in a Heritage Fair held in the Eco-Centre at French Fort Cove.

“We heard about the Heritage Fair and thought it would be a good opportunity to show some of our models,” Pat says. “After the fair was over, we were asked to leave them there as a display for the Tourist Information Centre, which is in the same building.”

The miniature models depict some of the early history of the Miramichi. One shows the loading of spool wood on the Bartibogue, destined for England. Another shows the old Miramichi Hospital in Newcastle. One is of the old train station in Newcastle that was built around the 1800’s. The last diorama shows the old Seaman’s Hospital in Douglastown, where the club meets.

Whether it’s a small group of people who want to arrange a workshop session or an individual looking to learn more, John said they are always available to bring people in and teach them about the workings of the layout, operating the trains, modifying trains to Canadian design, how to make miniature buildings, and much more. Children and adults alike enjoy using the controls to operate the trains. Anyone who is interested is welcome to come to the Wednesday night meetings or they can call Pat Nolan at 773-3069.

Click to enlarge any of the photos below. To view more images visit the Mighty Miramichi Photo Gallery.