CAUTION: Remember the rest of this week is “Moose Season” so wear some Hunter Orange if you are going out into the woods. As well, this coming Monday October 2, “Bird Season opens in New Brunswick. 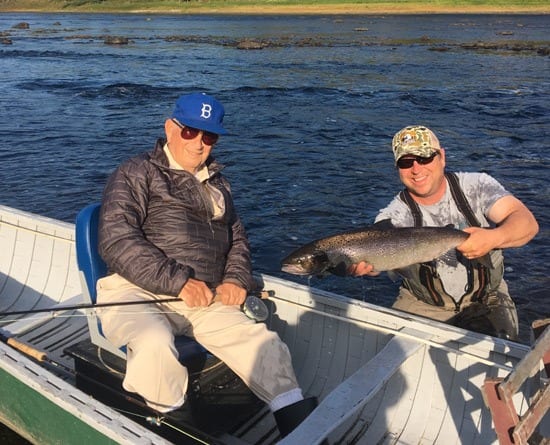 MIRAMICHI –Conditions have not changed much since last week, and the water is probably even lower. Fish are holding in deeper pools rather than trying to scramble over rocks. Water temps have been good until late Monday and Tuesday of this week which were extremely hot. Now there seems to be a small bit (we’ll take any we can get) in the forecast, and cooler temps for a while. There have been reports of some salmon jumping in tidal waters and some showing up on fish-finders, so it seems that they are here and waiting for a raise of water to head up-river. Don’t be standing in their path when the run hits or you might get bowled over!

W. W. Doak and Sons in Doaktown said fishing there was slow with very low water. The cooler temps had been a saving grace until Monday and Tuesday of this week, but colder days are forecast this coming week. Nevertheless, there was an odd fish being caught, and above Boiestown, the camps were doing better.

Flies of choice were Bombers, and small wets such as Glitter Bears, Green Machines and some small Shrimps on nos. 8 & 10 hooks.

Andrew Anthony of Ledges Inn in Doaktown and Mountain Channel in the Rapids area said the Doaktown area was very slow with only an odd old grilse being hooked. The water was very low. However, Mountain Channel was doing much better as there is more water there. They caught a few this past week, and four fresh salmon were hooked there Tuesday morning.

Flies of choice were small wet flies such as Green Stone Flies and Undertakers on nos. 10 & 12 hooks along with a variety of Bombers.

Herb Barry Sr. of Herb’s Fly Shop on the Station Road in Blackville was away moose hunting and unavailable for comment.

Curtis Miramichi River Outfitting in Blackville said there was an odd person catching fish, but certainly not many. The water is extremely low and had been a good temperature until Monday and Tuesday of this week. The forecast looks much better for the next week or so as far as temps are concerned, but there is very little rain in the forecast.

Flies of choice were Undertakers, Glitter Bears, Preachers and Same-Thing-Murrays along with some Fall patterns such as Ally’s Shrimps and General Practitioners on small hooks. Some were even trying the Red Francis, a last choice when nothing else is working.

Jim Laws of Miramichi Hunting and Fishing in Newcastle, Miramichi reported only an odd fish being caught. Basically, there was no water in the tributaries to fish in. Fortunately, temps have been good until early this week, and the forecast looks good for temps for the next week or so.

There were a few stripped bass around and a few bigger ones were being hooked. However, the best Fall fishing for them comes later in October. One angler had gone to Napan on Sunday, but saw nothing, so tried the Loggieville Wharf on his way back just at dusk. The first few casts produced nothing, but then the water came alive and he hooked nine.

Flies of choice were Bombers, some Fall patterns and Green Machines & Bear Hairs.

Syd Matchett of Trout Brook Fly Shop on the Northwest Miramichi was out “Moose Hunting” or chasing “Swamp Donkeys” as he calls it. However, not much has changed on the Northwest as the water in extremely low. A mouse would only have to wear hip-waders, rather then chest-waders, to stay dry.

Debbie Norton of Upper Oxbow Outdoor Adventures on the Little Southwest Miramichi had one of the better reports. She described fishing as “good”. Her sports were catching fish. Ian Cross from Ontario hooked a 14-pound salmon, Janice Cormier of Moncton area had a grilse and Fred Lane of New Hampshire (a member of the American Salmon Syndicate (ASS) who visits annually caught five salmon thus far. The water is low and continuing to drop, although temperatures have been good except for Monday and Tuesday of this week. Next week is supposed to be much cooler.

So with Fall Foliage kicking into gear, cooler temperatures and hopefully some rain, with a little “Cast ‘n Blast” in the works, it is time to get out and “on the water”.

NOTE: Author and angler Wayne Curtis has a new book of Short stories out this past week. It is titled HOME COMING: The Road Less Travelled. It sells for $21.95 Canadian. Wayne will be at the Coffee Mill in Newcastle Thursday afternoon September 28 to chat and sign.

Thought for the Week: “I have many loves and Fly-Fishing is one of them; it brings peace and harmony to my being, which I can then pass on to others.” – Sue Kreutzer

Pink Salmon in Gander River Likely from Misguided Russian Stocking
~~~~~~~~~~~~~~~~~~~~~~~~~~~~~~~~~~~~~~~~~~~~~~~~
Pink salmon have been found in considerable numbers in rivers and waters around Great Britain this year, thanks to an exploding population of stocked fish creeping east and south from Northwest Russia and nearby Norway.
http://asf.ca/pink-salmon-caught-in-nl-likely-from-russian-stocking.html